"Good luck to you. Fight with all your might, as I will."
— Abelia

Abelia Schillfelt (アベリア・シルフェルト, Aberia Shiruferuto?) is a fictional character in Namco's Soul series of fighting games. She appears in Soulcalibur III side-quest mode Chronicles of the Sword as one of the player's supporter and enemy as well. She is also an unlockable Bonus Character in the main game. She represents the "Sword & Shield" Create-a-Fighter discipline.

Since Abelia comes from the Chronicles of the Sword mode, her canonicity is disputed.

Abelia was born in the family of a known officer of the Grandall Empire. When she entered the academy, her natural talent was quickly recognized. She came to accept the praising and respect and eventually it pleased her, leading Abelia to believe that was her rightful place in the world.

Then a new recruit came to the empire. Without her talent, story or culture, he/she was another soldier on the group. But he/she showed something appealing, that could not be learned or bought.

She recognized her sense of justice as only a feeling of superiority and the pleasure of being recognized. She felt a part of her heart break apart.

But when war broke on the Empire, she took her weapons and headed on her own will to protect her own justice, even if she was assigned to the same cadet who overshadowed her.

Abelia fought with her teammates to fend off the Dalkian forces, until the unit was ordered to attack the Halteese republic as well. Abelia stayed behind and kept her attack on Dalkia, until she reached the last line of defense. But at that time, all her soldiers were defeated by Dalkia's elite force. Still she kept her position until the player returned from Maletta during Chronicle 11. Abelia rejoined the team until Dalkia's fall.

A year later, she was once again assigned under the Cadet's leadership, this time against her former master Girardot, now a rebel. Even though he was her teacher, she held no belief in what she did as being wrong. Abelia carried out her orders against Girardot until his demise.

Then the Cadet themselves rebelled and formed the Arthias rebellion. Abelia was chosen to stop him, believing once again that she was on the correct side. But once the player defeated her, she understood the real threat and joined them once again.

Abelia's icon from the character selection screen in Soulcalibur III 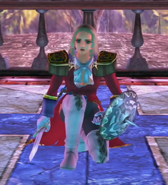 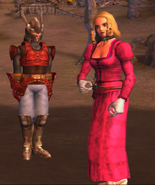 Abelia in the Chronicle of the Sword Ending (Third outfit)

Abelia in Soulcalibur: Broken Destiny
Add a photo to this gallery

Abelia card from UFS
Add a photo to this gallery

Retrieved from "https://soulcalibur.fandom.com/wiki/Abelia?oldid=180335"
Community content is available under CC-BY-SA unless otherwise noted.