Acheron is the long sword Cervantes used during his days before he obtained Soul Edge. In Soulcalibur IV he used it again for obvious reasons, his half of Soul Edge merged back with the complete Soul Edge. The sword has a wide blade that has a gold guard, although Cervantes' concept art shows it with a dark gray guard. Nonetheless, it is a well balanced weapon. It appears in Soulcalibur, Soulcalibur II as an extra weapon, and Soulcalibur IV through Soulcalibur VI as his primary weapon.

Nirvana is a pistol sword or in other words a sword with a gun for a hilt, this makes it a deadly weapon, as Cervantes is shown using to break deadlocks and to shoot others with an unblockable bullet. Strangely, Nirvana means great bliss, or in Buddhism philosophy, the state of perfect blessedness achieved by the absorption of the soul into the supreme spirit, which is kind of ironic, as Cervantes absorbs souls to live and for power, but is cursed by the fact he slaughtered his crew with no knowledge of it and was even used as a puppet for Soul Edge, he also ends up becoming a bit corrupted. 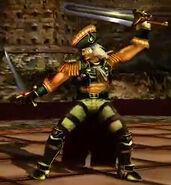 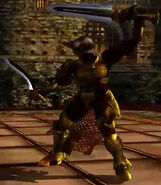 Cervantes wielding the Acheron and Nirvana in Soulcalibur IV 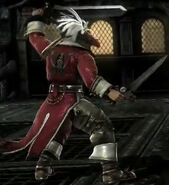 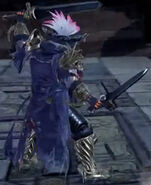 Cervantes wielding Acheron and Nirvana in Soulcalibur VI
Add a photo to this gallery
Retrieved from "https://soulcalibur.fandom.com/wiki/Acheron_%26_Nirvana?oldid=167132"
Community content is available under CC-BY-SA unless otherwise noted.