Core of the Macrocosm

Beyond reckoning on the Earth's calendar

"Challenge me again if you dare!"
— Angol Fear

Angol Fear (アンゴル・フィア, Angoru Fia) is a Bonus/Guest character in Soulcalibur IV designed by guest artist Mine Yoshizaki. She has direct connections to the Sgt. Frog/Keroro Gunso franchise, although she debuted in Soulcalibur IV itself and she uses Seong Mi-na's moveset. Her weapon, named Lucifer Spear Black, is a spear with a large moon-shaped ball at the end of it.

What lies in her soul is Pity.

Angol Fear stands at 5'10" making her one of the tallest female characters in the series. Her appearance makes her fairly unique too. She is the only character to retain her anime facial features in game, perhaps to enhance her other-worldly aura. Her costume is comprised of grays, blacks and whites and often detailed with silver edging. Her skin is tanned and her eyes large and grey.

Once there was a man who, disappointed over life and the world, entreated the heavens to curse all existence as soon as he died.

While alive, the man acted as a prophet. By achieving a momentary connection to the cast annals of history that slept in the abyss of the cosmos, he was able to learn about events from the past and future. But, in as deep a despair as he was, the man used his supernatural link in an attempt to send his regrets into the core of the universe. Until, at last, he made a pact with the Will of the Cosmos: destroy the planet.

Without giving the matter any further thought, the Will of the Cosmos made its decision. The world would be destroyed after a five hundred-year grace period. During that time, the Earth's doomed inhabitants could try to change their wicked ways.

However, as soon as the man died, a visitor came to earth. While she was a marshal in direct service of the Will of the Cosmos, entrusted with the power to punish on its behalf, she had not been tasked with the Earth's destruction. Instead, she was to investigate the earth. Five hundred years from now, when the one tasked to destroy the planet arrived, would he or she find Earth, a land where swords, spirit, and cursed waged endless battle, worthy?

Depending on what she found, there might be no need to wait for the appointed executioner to arrive. The day she judged Earth unworthy would be the day of judgment.

The people who seek Soul Edge are pathetic and cannot control that much power. However, most people on earth live in peace, so there's no need to destroy the planet now. Unless, of course, the planet destroys itself...

The text-only epilogue states this: When that time comes, she will be ready to give them a fitting end. This "she" refers not to Angol Fear, who comes to observe originally and not destroy, but to Angol Mois, the one who is actually charged with deciding the fate of the world.

Angol Fear can be considered a fairly hostile character who doesn't hold back during fights. Her intro quotes such as "I will remove all obstacles in my path" and "Fool, you dare to stand up to me?" make her an intimidating and confident opponent. She cares little for the humans of Earth and seems to think of them as mere fodder. Despite her outwardly cold and severe personality, she can be considered level headed and fair. In her ending she spares the planet not because of mankind, but the numerous other lives within it. This shows that she is at least considerate to some degree.

Furthermore, she can recognize strong warriors, even praising them in one win quote "That did amuse me for a while." Although she can equally be scolding in her remarks "You risk your life and that's all you've got?'

Overall, she is a fairly serious woman who has no time for weaker opponents but may find it interesting if they can provide her a challenge. She is confident in her own strengths and can come across as intimidating.

Angol Fear appears in Tower of Lost Souls in the Ascend mode as a boss under the floor "Threatening Mirror". 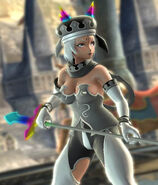 In game screenshot of Angol Fear

In game screenshot of Angol Fear

Angol Fear and Cassandra by Mine Yoshizaki