Arcturus was Algol's son long ago. Jealous of his father's power, he stole Soul Edge for himself. But his will was not strong like his father's, and so he was possessed by the evil sword. Under its compulsion, Arcturus killed his mother and the ministers of his father's court. The sword then commanded him to destroy his father. Left with no other choice, Algol overwhelmed and killed his son in combat. Algol's sorrow after his son's death persuaded him to create the spirit sword Soul Calibur.

In Soulcalibur II's Weapons Master Mode, one chapter sees the player searching for an ancient knight named Arcturus, whose spirit is then fought (represented by Charade).

It is most likely not the same Arcturus as this mode is set on a fictional location, but it should be noted that on another chapter there is a country called "Algol". It has yet to be determined whether Namco had the storyline of these two characters in mind at the time, or they simply named them after these two items in Soulcalibur II.

When Soulcalibur III was in the making, the preview sites stated that Soul Edge was once used by "a king who was forced to kill his son".

The only time Arcturus is confirmed to appear is in the fourth installment of the series, and he is seen exactly four times in that game: in one of Algol's flashbacks (featured in the introductory cutscene); in Talim's and Sophitia's endings; and as an illusion created by Zasalamel out of Algol's memories, sent to fight Algol in his story. The illusory Arcturus uses Nightmare's fighting style and wields Soul Edge (Nauplius). He is the only NPC in the game to do so. Most of his dialogue comes straight out of character creation, but he has one unique line: "Father, is that you?"

He cannot be completely created in Character Creation; much of his costume was designed to look similar to Algol's, whose clothing cannot be selected, but his face, hair style and weapon can be selected. So it is possible to create a close model to Arcturus using the aforementioned items, it is just impossible to create his exact costume. The following character design is probably the closest one can get to how Arcturus appears, with what is offered by Character Creation.

Charade, who the knight Arcturus' spirit takes the form of
Add a photo to this gallery 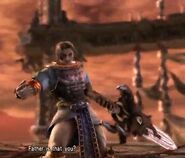 Add a photo to this gallery
Retrieved from "https://soulcalibur.fandom.com/wiki/Arcturus?oldid=160092"
Community content is available under CC-BY-SA unless otherwise noted.