After he is killed, a new Astaroth appears in Soulcalibur V. However, the original returned in Soulcalibur: Lost Swords and Soulcalibur: Unbreakable Soul. Throughout the Soul series Astaroth is referred to as "Black Giant" and "A Soldier Of The Heretics".

Ares, the god of destruction, desired Soul Edge to dethrone his father, Zeus, so he ordered Kunpaetku, the grand priest of the cult order Fygul Cestemus, to seek it out. Astaroth, a golem, was created in hellish heat under the divine protection of Ares to head up the quest. Kunpaetku ordered his creation, Astaroth, to find the demonic blade. As he watched Astaroth depart from the shrine, the grand priest laughed to himself as he planned to keep the Soul Edge and become a god himself. Unknown to Kunpaetku, however, Ares had possessed Astaroth with his servants, the Keres, to ensure that Kunpaetku would not betray him. When Astaroth finally found Soul Edge, he had lost half of himself during the battle with Sophitia.

Deciding that Ares would not be pleased with the sword in this condition, he agreed to help the Azure Knight, Nightmare, build his power by collecting souls by slaughtering countless victims. As Astaroth was finally ready to betray Nightmare and take the Soul Edge from him, Kilik, Xianghua, and Maxi stormed Ostrheinsburg Castle, and Astaroth was killed by Maxi. Four years later, signs of Soul Edge began to re-emerge, and Ares resurrected Astaroth in an attempt to retrieve the evil blade once again. This time, though, his body had been infused with the shards of the Soul Edge, making him more powerful than ever before.

Astaroth had set out on the trail for the evil blade, but a problem arose. The grand priest Kunpaetku had realized his golem was not behaving as originally instructed – that another force now claimed ownership over Astaroth since his initial creation. In order to reclaim Astaroth as his servant, Kunpaetku performed a ritual on the lowest level of the cult's temple and unleashed a powerful curse on him. Astaroth fought back against the curse, for he had become an ideal host for the Keres, because of the fragments of Soul Edge he had taken in during his resurrection. He would destroy anyone who stood in his way, and now the cult had become nothing more than an obstacle in his path. Astaroth entered the temple to destroy the cult once and for all, and his whirlwind of destruction mowed down everything in his path.

The curse had only fueled him with anger, and he was determined to destroy anything and everything he saw. The temple of the heretics had become a crucible of chaos. Astaroth pursued Kunpaetku into the deepest part of the temple, but the grand priest managed to escape at the last minute. Only the words the priest left behind remained, telling him that he was nothing more than a failed doll modeled after a mere human. Astaroth immediately stopped in his tracks, distracted with this new found horrible knowledge, and began to search the temple's archives for his roots. He had been made in the image of a man called only by the name "White Giant." Astaroth destroyed the facility in which Kunpaetku's ritual had been performed, and his curse faded such that he regained his true strength. He then proceeded to destroy the temple completely until it became unrecognizable debris, and nothing was left but chaos and rubble.

Fygul Cestemus had been wiped from history by the very being that they themselves had created. Astaroth stood within the ruined temple, quietly thinking to himself. If the "White Giant" he had been modeled after was as powerful as himself, then that man must surely be the greatest soul on earth, the perfect nourishment to resurrect the Soul Edge back to its full power. Perhaps Astaroth himself did not realize his own hidden desire to destroy the "White Giant" – to make himself a complete creature, unique without any model. The golem set out, his new objective set, disappearing into the mirages in the distance. Behind him was only a column of smoke rising from a ruinous wasteland; in front of him somewhere was the perfect soul.

Astaroth had been unconsciously fighting the thoughts of him being created in the image of the "White Giant". Perhaps because of this, his body has been twisted to the point where he no longer looks remotely human. But then he finally found the White Giant and nearly killed him. Suddenly, he realized that he had been serving Ares all this time. This thought made him insane, and he destroyed the landscape around him.

Then Tira approached him, and told him that she can bring him to a fitting place where he could hunt a god. However, Astaroth can clearly see that she is a very loyal servant of the evil sword, and she was just using him. Then again, she was right about the fact that he needed a better place to find souls. So he went to Ostrheinsburg and became Nightmare's servant once again, only this time, he plans to devour everything; those who descend upon Ostrheinsburg, and even Soul Edge itself.

Astaroth has only a minor role in the story mode, as he is defeated by the player and his fragment of Soul Edge is taken.

Fygul Cestemus, a cult that worshipped the twisted god Palgaea, was preparing to effect its grand revival. "Pain...the pain! UAARRRGH!" From the depths of a subterranean temple, newborn lungs screamed in torment.

The cult's man-made giant, Astaroth, had always followed his masters' bidding, until one day 17 years ago, the creature developed a will of his own and rebelled; both Astaroth and Fygul Cestemus were destroyed. But it wasn't long before the priests of Mars and Venus crafted a mechanical woman to retrieve Astaroth's core and return it to the cult, which had already begun to reform.

Factions battled for control of the precious artifact, but it wound up in the hands of High Priest Kunpaetku, who had clawed his way back from the brink of death. If Astaroth's core had been a gift from the gods, Kunpaetku reasoned, unraveling its secrets would grant him the power to create life of his own. He could surpass the gods themselves!

Finally, his research bore fruit. Beaming with triumph, the high priest gazed upon the new Astaroth as he roared and tore at his chains. "Yes, Astaroth, rage! Rage! Very soon the world will know your wrath..." That was only the first of many such monsters he created. Released from their underground lair, a host of them lumbered west, lured by the power of a distant soul...

In demonology, Astaroth is the Crowned Prince of Hell.

Astaroth appears as a card in Outcast Odyssey. He appears similar to what he does in Soulcalibur V but now wears a lot of armor. He is a Limited time card, available until the 7 September, 2015. He is a Level 5 rarity card. 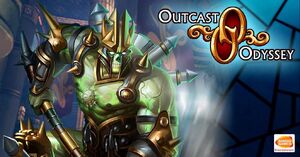 Retrieved from "https://soulcalibur.fandom.com/wiki/Astaroth?oldid=178611"
Community content is available under CC-BY-SA unless otherwise noted.