watch 04:21
Wiki Targeted (Games)
Do you like this video?
Play Sound

Astral Chaos is a realm that exists in the Soul series. It is one of the two realms to appear, the other being the regular human realm. The Astral Realm is the home realm of Soul Edge and Soul Calibur created from the memories of the former, and serves as the resting place of those devoured by Soul Edge, and serves as a realm Inferno retreats to should Soul Edge be shattered. Additionally, this is the realm in which Inferno challenges all who grasp Soul Edge in order to corrupt them. The Night Terror is the personification of the Astral Chaos itself.

Lost Souls exist here, both winged and horned as well as Malefic monstrosities. Cassandra resided here for an indeterminate amount of time.

On occasion Astral Chaos will show up in the human realm via rips from the fabric of space-time continuum called Astral Fissures which is one of the few ways normal people can enter it. However, to do so is a great risk as the chaotic energies corrupt and warp those who remain for long periods of time as seen via Malfested.

The flow of time also appears to be distorted, non-linear and indeterminate inside Astral Chaos, as seen when Cassandra fell through time years before and met a past version of herself. 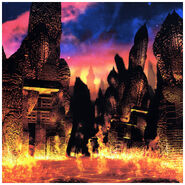 Tower of Glory: Spiral of Good and Evil

Tower of Glory: Most Holy Dichotomy

Utopia of the Blessed

Astral Chaos: Tide of the Damned
Add a photo to this gallery
Retrieved from "https://soulcalibur.fandom.com/wiki/Astral_Chaos?oldid=170274"
Community content is available under CC-BY-SA unless otherwise noted.