"Death to all those who oppose me."
— Aurelia

Aurelia Dichalla Dolce Dalkia (オーレリア・ジカルハ・ドルシェ・ダルキア, Ōreria Jikaruha Dorushe Darukia?) is a fictional character in Namco's Soul series of fighting games. She appears in Soulcalibur III's side-quest mode Chronicles of the Sword as the queen of one of the empires and final boss of Chronicle 12. She's also an unlockable Bonus Character in the main game. She represents the "Sickle" Create-a-Fighter discipline.

As a woman of considerable wealth, Aurelia dresses in a regal manner. As a Queen, she wears a dress befitting a monarch. Gold is a prominent color in her costume which resembles a royal gown. Her crown is decorated with an elaborate golden metal piece that resembles thorns. She wears white gloves, a dark belt decorated with gold circles and a diamond necklace.

Her appearance compliments her royal origins, while the golden themes found within her costume imply a woman of greed and vanity.

Aurelia was one of the concubines of the King of Dalkia, and due to her status she was not capable of gaining any inheritance after the king's death. At some point she began a secret relationship with the leader of the Dalkian Army and the king's personal guard named Roin, and together they plotted the King's death through poisoned food.

After the king's death, Aurelia quickly seized control of the kingdom. Suspicion was raised against her, since the death was still unresolved and it was too sudden, but Aurelia received help from Roin and the army and she successfully obtained leadership of Dalkia.

Her first action was the reinstatement of aggression towards Halteese, but she would eventually raise arms against Grandall as well, mostly by the use of Chester, who acted as an adviser.

After that, Aurelia spent most of the chronicles in Dalkia's castle, sending troops against the player's army and giving comments on their victories. Finally, in Chronicle 12, the player assaults the capital Revless and Aurelia confronts them as the last boss, after Roin's attempt at fending them off at the castle's entrance. Aurelia's fall dictates Dalkia's defeat and the end of the war.

As a queen, Aurelia display's a haughty, regal disposition and expects everyone to do as she commands. She is generally disparaging to her foes in battle, often belittling them. She seems to enjoy punishing opponents with her chain sickle, seemingly thinking that they are merely for her own amusement.

She is shown to be very treacherous, selfish, and greedy, poisoning the King in order to further her own standing.

Aurelia's icon from the character selection screen in Soulcalibur III 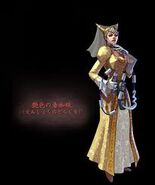 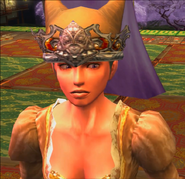 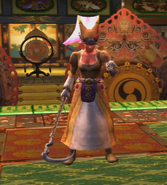 Aurelia with the Black Widow

Universal Fighting System
Add a photo to this gallery
Retrieved from "https://soulcalibur.fandom.com/wiki/Aurelia?oldid=176279"
Community content is available under CC-BY-SA unless otherwise noted.