The reference behind the weapon's name is possibly a mythological nod, alluding to the legendary rainbow bridge —Bifröst— described in Norse mythology. The bridge was constructed by the Æsir to lead from Midgard, the realm of the mortals, to the heavenly world of Asgard.

Tira's ring-blade visually invokes its mythological namesake. Bifrost is comprised of two rings; the decorative inner ring is made out of stained glass, its mélange of colors reminiscent of a rainbow, while the outer ring is significantly sharper, silver, and surrounds the edge of the inner ring. Its blades are shaped like sleek, stylized wings.

In Soulcalibur III, Bifrost was available for purchase at the Weapon Shop - no special requirements were needed to unlock it. When equipped, Bifrost provided higher defense and could protect Tira from some ring-outs.

Bifrost was altered to suit the renovated weapons system in Soulcalibur IV. Out of all of Tira's unlockable ring-blades, it possessed the highest defense, but was the least powerful in terms of attack strength. Bifrost could be bought in Character Creation mode for 7,500 Gold after completing Story Mode with Tira.

In Soulcalibur V, Bifrost does not require unlocking and is available from the beginning of the game. 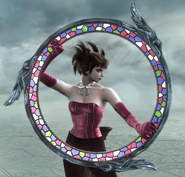 Bifrost in Soulcalibur V.
Add a photo to this gallery
Retrieved from "https://soulcalibur.fandom.com/wiki/Bifrost?oldid=169176"
Community content is available under CC-BY-SA unless otherwise noted.