Chie (千恵) is Li Long's lover. The daughter of Hachibei, the former leader of the Fu-Ma Ninja hiding as an innkeeper, she had lost her ability to speak following the death of her mother. Chie nursed Li Long back to health following his failed attack on the Japanese feudal lords and the two eventually fell in love. One day a battle broke out when a Fu-Ma ninja, sent by Toki to receive a sword that Hachibei had stolen from him, arrived in the inn where Li Long was staying, leading to the apparent death of Chie. Li Long, mistakenly believing that Heishiro Mitsurugi had killed her, then set out to find Soul Edge and exact revenge. However, unbeknownst to Li Long, Chie had survived and was pregnant with Li Long's child.

She would be reunited with Li Long, after Taki had encountered him and informed him of Chie's survival.

Several years later, Chie would take up her father's old position as head of the Fu-Ma and be responsible for bringing up Natsu. 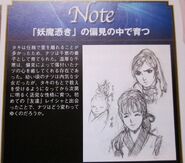 Chie's ghost in Li Long's input ending
Add a photo to this gallery
Retrieved from "https://soulcalibur.fandom.com/wiki/Chie?oldid=164758"
Community content is available under CC-BY-SA unless otherwise noted.