This article is a stub. You can help the Soulcalibur Wiki by expanding it.

Curtis (birth unknown, died 1583) is a non-playable character in Soulcalibur VI who can be seen in Grøh's Soul Chronicle, and briefly in Libra of Soul. Curtis was a member of the Aval Organization. He uses Grøh's fighting style.

Curtis was the second son of a family of English knights that can trace their lineage back to the days of yore. Staunch supporters of the Aval Organization, his house has produced a number of notable warriors and leaders, including many who were raised to Aval’s Twelve, organization’s ruling council. Thus, in the tradition of his family, Curtis was brought up to lead Aval into the next age. Curtis, like Grøh, became one of the Twelve.

Well-versed in both combat and strategy, his talent as both warrior and tactician resulted in nearly a flawless mission record, a feat few can match within Aval. He was often teased for caring almost too deeply for his subordinates, but this burning sense of responsibility – along with his ability – means that the missions he was responsible for almost always resulted in few casualties and little collateral damage. As such, he was a popular and well-regarded leader.

Sworn friends, Grøh is the only one Curtis could truly speak his mind to. The two young men fought side-by-side on many missions, and together rose through the organization’s ranks to prominence.

Curtis once looked upon Grøh’s single-minded focus on battle and inability to make friends with displeasure, but after many missions together, the two grew to understand and respect each other. In fact, Curtis believed Grøh represented the beliefs of Aval more than anyone, and often fretted about how to make his friend more approachable and liked by his peers.

Being part of Aval Organization, Curtis is directly an ally of Wolfkrone Kingdom. He and Grøh are the first persons to witness George von Krone’s downfall into a malfested when Evil Seed’s widespread malfestation occurred, thus manage to warn the malfestation survivors like Hilde and Wilhelm von Krone about the kingdom’s recent situation. Curtis also entrust Wilhelm the Aval’s latest weapon to combat malfested. 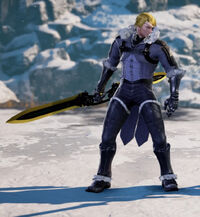 Add a photo to this gallery
Retrieved from "https://soulcalibur.fandom.com/wiki/Curtis?oldid=177312"
Community content is available under CC-BY-SA unless otherwise noted.