Good (When Jin is in control)

Devil Jin (デビル仁, Debiru Jin) is a character from Namco's Tekken series, whose fighting style and some of his outfit parts can be used in Soulcalibur V. His style also appears in Soulcalibur: Lost Swords, but is not yet playable, appearing only in non-playable minions.

Much like KOS-MOS in Soulcalibur III, Devil Jin is considered a pseudo-guest character, as he doesn't appear in person.

Devil Jin is an anti-villain/anti-hero featured in Namco's Tekken series who serves as the dark counterpart of Jin Kazama (風間 仁 Kazama Jin), the main protagonist of the series. He is Jin after succumbing to the Devil Gene, a malevolent power that he inherited from his father, Kazuya Mishima which transforms those imbued with it into a terrible fighting monster. In Jin, it gives him demonic features such as horns, black feathered wings, sunken white eyes and a third eye on his forehead. In Devil form, Jin resumes the use of the Advanced Mishima fighting style as he had "unlearned" in favor of traditional karate mixed with the Kazama Self-Defense style which was taught to him by his mother. In addition to this, he also gains the ability of flight with his wings and the ability to utilize demonic energy by firing beams of energy from the third eye on his forehead.

The Devil Jin fighting style is the second weaponless fighting style since Soulcalibur II with Heihachi. The fighting style is based on his Tekken 6 moveset where he can perform very powerful but yet difficult devastating combos that leads to very punishing damage that rivals Nightmare in terms of sheer force against the opponent. Prior of using the "Tempered Fists" the style also allows the player to perform laser beams from the eyes and flight movement simliar to Kratos and Aeon. Overall the range is quite short and the style is only available for only customs characters. It is banned from tournaments.

Demon Laser Cannon: The Demon Laser Cannon is the Devil Jin fighting style Critical Edge signature move. The custom character starts to spread his/her wings (simliar to Elysium) and starts a diving kick at the opponent that lauches them in the air twice until the custom character begins to do a powerful eye laser beam Devil Blaster and performs a grab move that slams the opponent to the ground which is simliar to one of Algol's moves. This Critical Edge is useful when performing juggles since the move begins somewhat in the air first.

The "icon" of Create-A-Soul from Devil Jin's Soul. 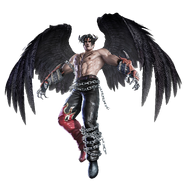 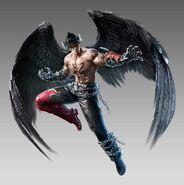