This diver is an unnamed character from Soul Edge's ending in Soul Edge. Little is known about her, other than the fact that she became possessed by the Soul Edge 400 years in the future. 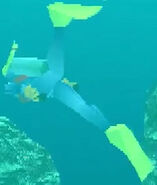 The diver in Inferno's ending
Add a photo to this gallery
Retrieved from "https://soulcalibur.fandom.com/wiki/Diver?oldid=174792"
Community content is available under CC-BY-SA unless otherwise noted.