A modified nunchaku with a blade on each end. Its damage-dealing ability is greatly increased, but in turn, it requires great skill to handle. Li Long, a Chinese martial artist, was famous for using this weapon. It is said that its sharpness increases in proportion to its wielder's strength of will.

Li Long wields a pair of handmade nunchaku, originally only one in Soul Edge, made by himself. Both nunchakus possess blades on each of their ends. Their damage-dealing abilities are greatly increased, but they require great skill to be handled without receiving severe injuries. On the U.K. and Eastern European versions of the game, the weapon is referred to as a Sansetsukon, a three-sectional staff, though this resembles more a bladed nunchaku with its chain replaced by a third, shorter section. 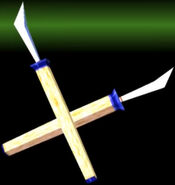 Falcon as a nunchaku in Soul Edge

Li Long wielding the Falcon as a nunchaku in Soul Edge

Li Long wielding the Falcon as a three-sectional staff in the PAL version of Soul Edge
Add a photo to this gallery
Retrieved from "https://soulcalibur.fandom.com/wiki/Falcon?oldid=165803"
Community content is available under CC-BY-SA unless otherwise noted.