Start a Wiki
watch 01:51
The Loop (Games)
Do you like this video?
Fanon Article Ownership
This Fanon page was created and is owned by Bagazstormy (talk), and as such is not part of the Soul series canon.
Unless the edit is constructive and/or minor (such as fixing a template), please do not edit this page unless given permission from the author.

Noir Voirre is a character that exists within the continuity in the Soul series. Making his first appearance in Soulcalibur: Undead,  and also appearing in the sequel Soulcalibur: Vessel. Noir quickly becomes a central character, playing an important part in the storyline. Noir is a loremant, a race of superhumans with supernatural powers. He is a member of a league containing loremants known as the "Grå Skugga". He has cryokinetic abilities, referred to as the ability to "summon the cold breeze from hell".

What lies in his soul is "Serenity"

He is also referred to as "Warrior of the Black Light"

Noir's most striking appearance is his hair, which was black at birth until he awakens his powers when he was a child and turned his hair completely white. Noir's natural eye color is grey with his left eye glowing white each time he uses his powers. His hair and left eye are forms of unique mutations that can be exhibited by loremants.

In Soulcalibur: Undead, Noir wears a long coat, pants, & grieves, all completely black. His coat has a long collar which partially covers the lower part of his face and a big rune-like pattern that is white in color. Noir covers his left eye with a golden faceplate. He also wears a necklace with a dagger-shaped pendant, a symbol inherited by previous wielders of the sword Förmörkelse.

In Soulcalibur: Vessel, the general aesthetic of his attire is pretty much identical to his previous appearance. Noir now wears a different coat with white furs along the neck and a similar pattern to his previous coat. The coat itself is longer on the right side extending below his calves and is secured to Noir's waist with a rope. He also wears new gloves with white fur on the openings. Noir wears new grieves that now extend up to his thighs offering more armor. As a form of defection from the Grå Skugga, he discarded his faceplate and necklace, sporting a white scarf instead. His hair is also noticeably longer and a lot shaggier

Noir is a very closed & quite individual because of the childhood trauma he experienced where he accidentally destroyed his village when his power awoken, killing everyone in it. Due to this, he used to treat his "gift" as a form of a curse to him & others. As time goes by, he eventually managed to control his power to his will with the help of fellow Grå Skugga members, E and Raquelle, to the point of making him worthy enough of being the wielder of Förmörkelse, the legendary sword passed down among selected Grå Skugga members. Despite the respect and awe of other loremants he gained as a member of the league, he retained his cool and calm nature. Always keeping his emotions on check and favoring his wit and logic in acting over personal feelings.

Noir was taken in by the Grå Skugga when Raquelle discovered him lying on the city streets, starving to death. Due to this, he has a close relationship with Raquelle, who he looked up to as a mother figure. Raquelle is the only person who Noir is willing to open up to. He is not as trusting to others however. Even though he believes in the league supposed "cause" which is to protect and nurture all loremants in the world, Noir has never fully trusted the other loremants within the league. Despite this, he is willing to compromise himself and is able to work well with others on league missions, keeping the league's cause his main priority, refusing to see other loremants experience the same things he experienced when he first discovered his powers.

Overall, Noir is considered as a neutral good character.

Noir was born in a remote village at the mountain tops, far away from the large cities below, hidden behind a curtain of snow as they would pour down all year long. The village itself was well known, albeit only the bravest of outsiders would climb all the way up due to the harsh terrain that was required to be passed through in order to reach the village, and so Noir grew up without knowing much of the outside world, with only the stories that his père told him about the "land beneath the snow" feeding his imaginations. He was the only child of his parents. His mère named him "Noir" as he was born in pitch-black midnight. His père was a gifted ice carver. His sculptures and carvings were famous both in and outside the village. Selling carvings was more than enough for him to make a joyful and loving family.

All was well for Noir until he reached the age of 9, where he starts to experience the dream.

In the dream, he was visited by a mysterious, bright, yet ominous light. The light told Noir that he was destined to have the power that can either be "the bane of his existence" or "the reason why he exists". The mysterious light came to Noir's dream every night, and every night, Noir finds himself awake, burning in cold sweat.

His parents initially thought nothing of the dreams, brushing it off simply as a nightmare. That is until the first white streak started appearing on Noir's hair. As the day goes by, more white streaks started covering his dark hair, now turning it completely white. Peculiar phenomena have also started plaguing the village. One of them was when the snow stop falling for one full week, followed by a 7 days long snowstorm in the next.

Noir fights with a unique Zweihander style in combat. His fighting style relies on utilizing his vast array of moves & stances to keep the opponent guessing his next move. His attacks have mid to far range and are very damaging. Most of them, however, are very slow to perform. Should a player is not experienced or is not familiar with his style, the small gap between his attacks can be used as an opening to counter.

Noir also has supernatural abilities. He has the power to summon the "cold breeze from the depths of hell" as described by E. When his power is active, his left eye would glow bright white. The "breeze" manifests itself in the form of a white mist. Apparently, the breeze itself is so cold that --as described by his victims-- it burns anything that it touches. He can also create ice & crystal construct with his power. These constructs are indestructible and would remain firm until Noir choose to destroy them, or if he is rendered unconscious.

Overall, Noir can be considered as a mid-to-high tier character.

Förmörkelse is Noir's main weapon. It is a giant dark sword that was crafted from a "sky rock" that fell to earth a long time ago. Förmörkelse had been inherited through generations to selected members of the Grå Skugga. The sword's unique "unworldly" material allows it to withstand the effects of Noir's power, whereas other materials will simply crumble to dust or burn should it be exposed to the hell breeze.

Fanon Gallery
This Gallery was created and is owned by Bagazstormy (talk), it is completely fictional showing pictures of Fan Characters.
Unless the edit is constructive and/or minor (such as fixing a template), please do not edit this page unless given permission from the author. 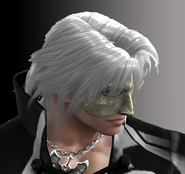 Add a photo to this gallery
Retrieved from "https://soulcalibur.fandom.com/wiki/FanChar:Bagazstormy:Noir?oldid=173589"
Community content is available under CC-BY-SA unless otherwise noted.