Start a Wiki
watch 01:51
The Loop (Games)
Do you like this video?
Fanon Article Ownership
This Fanon page was created and is owned by Bagazstormy (talk), and as such is not part of the Soul series canon.
Unless the edit is constructive and/or minor (such as fixing a template), please do not edit this page unless given permission from the author.

Saki Kizashi is a character that exists within the continuity of the Soul series. She makes her debut in Soulcalibur: Undead as one of its central characters, as well as appearing in the sequel Soulcalibur: Vessel. Saki is a descendant of the ancient Kizashi clan that seal & guard an ancient demon of evil. She is the current possessor of the Teishutsu no Tanken, the holy dagger that has the ability to seal the soul of anyone whose heart is pierced by it by chanting a certain spell.

What lies in her soul is "Sacrifice"

She is also referred to as "The Maiden of Ephemeral Heaven"

Saki has a dark brown hair and hazel eyes, unique traits common to the people of the Kizashi clan. She tied her hair in braids. In Soulcalibur: Undead, Saki wears what appears to be a dark blue sleeveless gi that is secure with a black belt on her waist. Over it, she wears a protective breastplate. She wears indigo pants that extend to her calves. She also wears a pair of protective grieve sandals that have the same colors as her gi. Saki wears a pair of green pauldrons with fur that attaches to her shoulders. She also wears a head protector that extends to her cheeks, an earring on her left ear, and a grey studded collar that is identical to his brother's. In Soulcalibur: Vessel, Saki sports a new gi which now has full sleeves, secured with a pair of grey armguards. She now wears a fire-motif fauld around her waist secured with a white sash. She no longer wears a faceguard, replacing it with a simple headband instead with the Kizashi insignia embedded on it. Her breastplate also sports a new, more intricate design. Her braid is noticeably longer and is now tied with a blue ribbon.

Saki's fighting style is called "Dai kesho" which translates into "Large inheritance". Her fighting style involves the use of a long lance and a short dagger in unison and a variety of moves. Her lance has a long reach & deal a quite large amount of damage. It is very useful should opponents are trying to keep their distance from her. The drawback of the lance, however, is that its weight makes it attacks slow. Should an opponent manage to dodge an attack, Saki is vulnerable to counter attacks. Contradicting with the lance, the dagger has a very short range and deals only with a small amount of damage, but the speed of the attacks is lightning fast. She also has charge attacks that are hard to perform but deal a large amount of damage. Most of Saki's moves also have high chances to do ring outs.

Overall, she is considered as a high-to-top tier character.

"Jōshō" means "Ascension" and "Teishutsu" means "Submission". Joshomaru is a long, dark blue lance. The tip of the lance has three edges, and the symbol of the Kizashi clan is drawn on a flag attached to the lance's handle. The Teishutsu dagger looks like a normal dagger with carved writings on it, but it is actually a sacred treasure of the Kizashi clan. It has the ability to seal the soul of anyone whose heart is stabbed by the dagger by chanting a certain spell. The said spell is the writing that was carved to the blade and only a descendant of the Kizashi clan can read it.

Fanon Gallery
This Gallery was created and is owned by Bagazstormy (talk), it is completely fictional showing pictures of Fan Characters.
Unless the edit is constructive and/or minor (such as fixing a template), please do not edit this page unless given permission from the author. 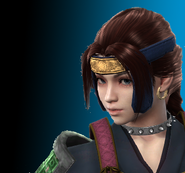 Add a photo to this gallery
Retrieved from "https://soulcalibur.fandom.com/wiki/FanChar:Bagazstormy:Saki?oldid=173590"
Community content is available under CC-BY-SA unless otherwise noted.