"Before else, be armed."
— Ayazuki

Unknown (uses March 31 as his birthday)

Unknown (uses age of 21 out of convenience)

Heigher than any of his peers

Just as red as yours

Raised by the Fu-Ma clan

Ayazuki (アヤヅキ) - is the character in the Soul series. He made his first appearance in Soul Calibur V.

What lies in his soul is Search.

In Soulcalibur V he is reffered to as He who had lost himself.

Ayazuki, most likely being born outside of Japan, resembles a typical European. He always cuts his hair to the very skin, leaving only a buzz-cut, as he considers long hair unpractical. His very bright, green eyes always attracted attention, as they seem to almost glow in the dark, being one of the reasons why he almost never takes off his helmet. He's tall and rather slim, but also very muscular, which is necessary to use his kind of armor, designed to withstand the heavy blows from the most powerful demons. Being made by the masters of smithing from both Europe and Asia, the armor is a mixture between a traditional ninja outfit and a European knight's armor. It consists of a dark brown, leather body-tight suit with grey stripes, dark brown pants and relatively light armor, possibly made from steel, decorated with two unknown metals, one red and one orange. The undersides of his gloves are made from black fabric.

Being found as an infant in the remains of the village destroyed by the demon, Ayazuki was raised by the Fu-Ma clan and trained in their arts to became one of the elite warriors. Being higher and stronger than most of his peers, he was chosen to wear heavy armor designed specifically to fight the most dangerous demons. He dedicated himself completely to wipe out the creatures which took his parents away from him. Although he barely remembered them, he remembered one thing clearly: the screams of terror as the demon slaughtered them. He didn't know nor cared how he survived, as long as he could search for the demon which destroyed the village.

On Ayazuki's 21th birthday, his growing frustration reached its limits. Not being able to find the demon who murdered his parents he accused his clan elders of hiding the truth from him. After an argument, they finally told him where the demon was hiding. Claiming that the demon was too powerful to be destroyed and that they kept the truth for themselves in order to protect him, they finally let him go. Ayazuki set on the journey alone, as he used to. He found the beast and defeated it with ease, which attracted his attention. "This is the powerful beast elders mentioned ? What a joke !". After returning home, Ayazuki accidentally overheard the conversation of the elders. "We cannot keep him unaware for ever.", one of them said. "If he learns the truth, the girl will be lost. He'll slay her just to get the demon.", another one added. "We cannot allow for this. Ayazuki is convinced that he slayed the demon who killed his parents. And let it stay that way. If the demon gets free, we may not be able to capture it again.", his own adopted grandfather said. "Then why did you allow her to leave ? The girl's overusing the demon's power. Maybe she even wants him to be free."

"Natsu is supposed to find her master. The outside world may teach her some discipline, actually."

Ayazuki didn't listen any longer. That night, he packed everything he considered useful and stole the clan's treasure: Holy Fangs, the blades of unmatched sharpness.

Leaving his whole life behind him, he set on the journey with only one goal: kill Natsu and get his revenge on the demon who took his parents.

Ayazuki, as a skilled hunter, was able to relatively quick find traces of Natsu and her group. Leaving Asia and seeing Europe for the first time, he was shocked to see how different the both cultures were. Using his hunting skills to earn the money necessary for his journey, he managed to locate Natsu in east Europe, in Holy Roman Empire. The girl, completely unaware of her pursuer's existence, would be surely slain if not the Fu-Ma clan's intervention. Two warriors crossed Ayazuki's path, both of them were ordered to bring him back, dead or alive. He managed to fight them back, as they were unable to pierce his armor. Not wanting to kill his former comrades, Ayazuki's avoided their vitals, hurting them only enough to buy him some time. However, as the fight ended, Natsu was gone - and the chance to slain Arahabaki along with her.

It took him some time to find Natsu again, but nothing sharpened his senses as much as a goal. Right now, the only goal he could think of was killing both girl and the demon. His vast knowledge of demonical abilites led him to one conlusion: girl's recklesness in using Arahabaki's powers could set the demon free. He didn't feel any remorse nor guilt, as he considered the girl both dangerous and vile. When he finally found Natsu's group, he was defeated by the combined effort of asian fighters. Anger filled him completely and he felt more detached from reality. As soon as he came to his senses, he realised that Natsu - and her comrades - were knocked out and completely at his mercy. To say he was confused was understatement - but he soon figured out what really happened. Finally understanding the truth, he decided to keep it to himself and leave Natsu alone.

After discovering the horryfying truth, he decided to become an outcast and live alone. He knew he couldn't return to his clan, not after desertion and stealing the holy blades. He lived alone in the wilderness for a few months, but when that didn't bring him serenity, he realised that it wasn't the solution. "I need to learn how to control it.", he thought. "Being a mercenary would do. Travelling around the world... maybe somewhere out there I'll be able to find peace."

His journey led him to Sweden, when he soon found out about a young captain, looking for a crew. After analysing the situation, he has made his decision. "I'll join them. But they cannot find out. At least, not yet."

After joining Runa's crew, Ayazuki found himself in the surroundings even more unfamiliar than Europe - the wide, blue surface of the seven seas.

Ayazuki is rather quiet, he prefers to listen instead of talking. He's very loyal, although he's never blinded by his loyalty and he's able to question orders he considers unwise. He's also very honest and somewhat harsh, but can also be gentle and tactful. Sometimes he looks down on others, but he also admires people he considers worthy. Despite his cold personality, he has a strong moral code. Although he obeys orders of his superiors, he would never do something against his rules. Ayazuki's able to break the law if needed, although he prefers not to, especially if this collides with his moral code. Because of his parents' death at demon's hands, he hates all the demons and hunts them relentlessly.

Ayazuki's fighting style is a variation of Musō-Battō-ryū, which is commonly used among Fu-Ma clan ninjas. He's a little bit slower than most of his fellow ninjas, although he makes it up with great strength and durability provided by his armor. He often uses his mass to knock the opponents down or to give his hits an extra impact.

The Inner Evil: Ayazuki will hold his dagger in the air and say "See you in hell". He will then stick his weapon into the ground and shout "Begone !", sending six blasts of energy through the stage and the opponent high into the air. 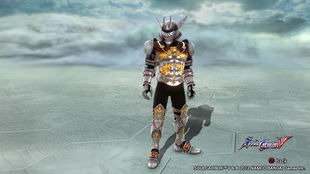 Ayazuki in his 1p outfit. 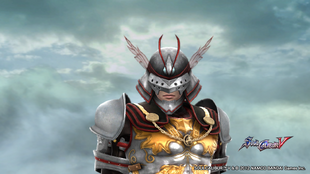 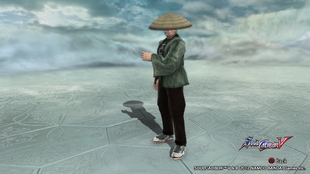 Ayazuki's 2p outfit.
Add a photo to this gallery
Retrieved from "https://soulcalibur.fandom.com/wiki/FanChar:Comix77:Ayazuki?oldid=122807"
Community content is available under CC-BY-SA unless otherwise noted.