Chooses to be called Mayamoto

As old as the mankind, if not older

None, prefers to be referred to as a male

Other demons could be considered his family, although he shares no visible bounds with them

Mayamoto (まやもと) - is the character in the Soul series. He made his first appearance in Soul Calibur V.

What lies in his soul is Laughter.

In Soulcalibur V he is reffered to as The Dark Secret.

In his true, demon form, Mayamoto resembles a combination of mantis and a dragonfly. He may choose whatever shape he wishes to have and change it at will. While sealed in Ayazuki's body, his powers are limited, although he's able to manifest himself through Ayazuki's armor and body. The usually grey parts of his armor become purple, while the orange ones turn white. Two pairs of insect's wing appear on Ayazuki's back, along with four insect-like limbs. His skin becomes pale, his eyes almost completely black and two horns adorn his helmet. His voice also changes.

Mayamoto is an ancient demon, living in the forests of Japan and enjoying the suffering that he brought on the others. He has been wondering through Japan for centuries, killing people, destroying their fields and burning down villages. One of these villages, though, was where he encountered something unusual: a second demon. When Mayamoto was busy with his carnival of death, a powerful demon Arahabaki arrived, enraged after losing his previous host. Arahabaki obliterated what little was left of the village and settled in baby Natsu. Using the diversion created by the other demon, Mayamoto entered the body of another child, Ayazuki. Realising the mistake he has made in panic, the demon who valued his freedom above all was suddenly imprisoned within walls of Ayazuki's mind. The boy wasn't even aware of its existence, nor were the Fu-Ma ninja who found him. But Mayamoto could be patient, if he wanted. And so he waited for almost two decades.

When Ayazuki finally hunted down Natsu, he attempted to kill her, wrongly thinking that it was Arahabaki who slayed his parents. Ayazuki was overpowered and defeated by the Asian fighters, but before they could decide what to do with him, a dark presence within him awakened: Mayamoto. Feeling the rage of the young man, Mayamoto took his chance and manifested himself through him, although not for long. As soon as Ayazuki came to his senses, he realised that the terrible demon who haunted him all of his life wasn't Arahabaki. His earliest memories floaded his mind and he realised that the demon was, in fact, inside him for all that time. Finally understanding what Natsu has been through for all of her life, he gained a new respect for her and decided to live alone in the wilderness, knowing that he was dangerous. Mayamoto just waited patiently, seemingly satisfied with his previous "show", as he liked to call it.

Ayazuki's solitude didn't last for long. He still couldn't find peace and the occasional flashes of Mayamoto's laughter still haunted him. As soon as he decided to join Runa's crew, the demon went quiet. Even more encouraged then before, Ayazuki travelled to Sweden, not knowing about two things. First of all: the demon could read his mind with ease, knowing his every decision. The second of all: a small ship in the middle of the sea, full of people, was a perfect place for a jester like Mayamoto.

Mayamoto is loud, flamboyant and sadistic. He knows things like compassion or friendship, although he despises them and considers boring. He thinks of himself as a great comedian, finding joy and humor in the suffering of others. He looks down on people, considering them only his temporary entertainment. He likes to talk to his victims, although he's incredibly hard to negotiate with. He randomly changes his mind and since he's almost immortal and invincible, he doesn't believe in any kind of consequences. He likes to tease other demons, knowing perfectly well that he cannot harm them directly. Because of his powers, he's not afraid to fight humans even while being sealed in Ayazuki, using his bear hands and demonic abilities.

In his true form, Mayamoto can choose from wide range of demonic powers, including, but not limited to, pyrokinesis, telekinesis, creating energy projectiles, flying, teleportation, creating illusions of himself and weather control. While sealed in Ayazuki's body, he may only access small part of his power, although a very dangerous part. He's able to use energy in various forms, fly and he's much faster and stronger than Ayazuki himself. He mostly chooses to use his fists, however, as he seemingly knows many martial arts. It is unknown how powerful he really is or if Ayazuki could potentially use a wider range of his powers.

The Killing Joke: Mayamoto spreads his wings and says "How about a joke ?" before he starts a diving kick at the opponent that lauches them in the air twice. He shoots a powerful eye laser beam and says "This one's..." then performs a grab move that slams the opponent to the ground and finishes with words: "... a killer !" 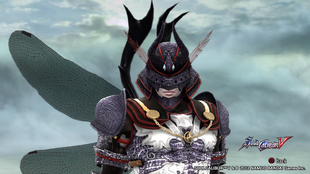 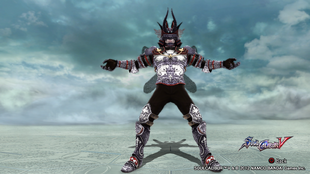 Mayamoto in his 1p outfit. 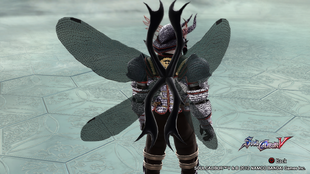 Mayamoto's wings.
Add a photo to this gallery
Retrieved from "https://soulcalibur.fandom.com/wiki/FanChar:Comix77:Mayamoto?oldid=169816"
Community content is available under CC-BY-SA unless otherwise noted.