Start a Wiki
watch 02:21
The Loop (Games)
Do you like this video?
Fanon Article Ownership
This Fanon page was created and is owned by DeniseOberg (talk), and as such is not part of the Soul series canon.
Unless the edit is constructive and/or minor (such as fixing a template), please do not edit this page unless given permission from the author.

Afton is a fancharacter by User:DeniseOberg and makes her first appearence in SoulCalibur: Dawn of Destiny

What lies within her soul is a power achived from the devoured.

Plase note that this is just a scrap of her story, I am working on her still so this story will change alot and be built on.

Born on the first cold afternoon of the year January Afton had her first name after the moth she was born in, and the second after her fathers fascination for nordic languages. Despite their wealth Januarys family was everything but weived with respect. This was because of her mothers insane studies and searching for something . Everyone knew that Elvira was obsessed with whatever she was searching, but no one knew for what reason or what it was in the first place. Truth to be told Aftons mother never knew what she was searching for herself.

Eventually her obsession grew that big she did not care for anything else and so January never had a chance to actually learn to know her mother. Yet despite not having any good connection to her she was in constant worry for her mothers health and mental state. This continued until her mothers death, something that brought so much grief to the family that the room with her mothers research was locked and never entered again. Many years passed by until one day when January found a notebook on the market. The notes in this book wehere oddly simillar to what she knew from her mothers old books, but it was not her mothers handwriting. Realising there might be someone out there who knew about what had possesed her mothers mind the young girl secretly entered her mothers old working room and continued the reaserch.

Months passed by without any conclution but January strated having weird hallucinations and nightmares all diffrent but in the same pattern; chaose. Many times she found herself in a twisted and chaotic world . The dreams felt so real to her she came to the conclution it was not a product of her own mind, it was something far more complex and far more dangerous. Slowly and without herself noticing it the dreams influenced Januarys very soul. Not until the day she woke up with two sharp cresent blades laying by her hands she realised what the chaotic realms energy had done to her. January had never been found of sharp objects, even less had she recived any knowledge or training in combat. Yet ever since that day she could controll those blades by her very hands, not even touching the metal itself. It was like if she had known them for so long she could controll them in every way possible, like if they where a part of her soul and always had been. In fear of this forgain ability the frightned lady made a decision to isolate herself.

Not many days after the dreams had started to change her inner soul a woman from england stood by the doorstep asking about a lost notebook. As she introduced herself as Isabella Valentine January feared this woman would take the book from her and emedietly ran down the old office to hide the book. But suddenly Isabella stood behind her in the entrance to the room. With few words the white haired woman made it clear to January that she knew more about the subject than neither January nor her mother had ever succeded to understand. When realising the woman infront of her could be her only chance of solving the mystery behind the chaotic void January offered to return the notebook if she would tell her all that she knew of the void of chaos. Isabella refused and January made the misstake of attacking her in order to force her out from the room. January lost the battle but during it Isabella had senced the chaose from within Januarys soul and then agreed to the ladys offer of exchange of information on one condition, not only would she have to return the notebook but also would she bring anything usefull of her own reaserch and join Ivy on a trip back to London to study the subject with her. Overall Ivy had caught intrest in how the lady could know about Astral Chaos without ever being in contact with cursed blade Soul Edge.

With the help of Ivy January constructed a compass device always pointing to the direction  of Soul Calibur. Unfortuneatly it never gave any signs of working properly.

One day January woke up in the middle of the night after a terrible nightmare. Wandered in Astral Chaos she had felt like if something, someone was calling for her. Lost in a world of chaos she was unable to understand the calling, unable to reach, a maze of objects lost through history and sorrounded by the sound of warriors who's souls had been lost to the cursed blade. It all left her confused and shatterned until she finally woke up only to find the compass showing signs of direction to the legendary sword. This was the night she left her mentors mansion without telling, and with her she took the compass. She needed to find the legendary blade herself. She had to find the cursed edge, she had to close the gate to astral chaos and once and for all bring and end to it. Closing this chaotic void for good could be the only way to silence the inhuman abilities she had been cursed with and gain back her humanity.

Afton has brown short hair with hair accessories being pieces of metal with purple crystals attached to them. She has a sweet and tender voice yet dead and expressingless eyes.

But being influenced by the souls devoured by soul edge and trapped in Astral Chaos Aftons personalety can sometimes take drastic turns and mimicing warriors of the past.

Afton is designed with an own and original fightingstyle but created with Voldos. Her original style has similarities to Violas and Talims. Afton weild her blades through her finger movements and has a very long range. Her horisontal and diagonal attacks are more effective than the vertical attacks. All in all Afton has low damage but high defence and great speed.

The dawn and dusk of chaos - a purple mist gathers around and within it you can spot weak glimpses of Astral Chaos. Afton starts moving her fingers very fast and elegant while her blades hits the opponent in a chaotic pattern.

Aftons special move in SC:Dawn of Destiny is to temporarily empty the opponents Gauge Meter while filling her own automaticly. Making it easier to use edge attacks. The moves effect isnt permanent though and you only got a small time to use the edge attack before both opponents gauge meters will go back to the same as before using the specialm move.

"Afton" means evening or afternoon in swedish. However her real name "January" comes from the roman god of beginnings and transitions; Janus. 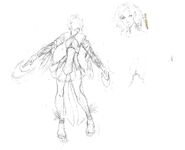 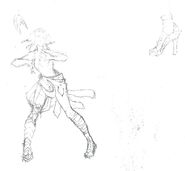 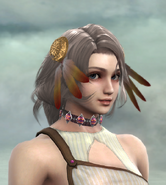 Afton as she appears in SC Dawn of Destiny 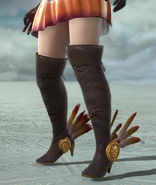 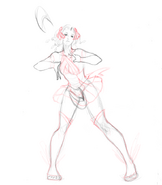 Aftons finished artwork in SC Dawn of Destiny
Add a photo to this gallery
Retrieved from "https://soulcalibur.fandom.com/wiki/FanChar:DeniseOberg:Afton?oldid=144928"
Community content is available under CC-BY-SA unless otherwise noted.