Start a Wiki
watch 01:51
The Loop (Games)
Do you like this video?
Fanon Article Ownership
This Fanon page was created and is owned by DeniseOberg (talk), and as such is not part of the Soul series canon.
Unless the edit is constructive and/or minor (such as fixing a template), please do not edit this page unless given permission from the author.

"foolish knight, you bare no strength of what so ever kind."
— Gwendolyn SCV

Gwendolyn is a fancharacter by user:DeniseOberg and she makes her first appearence in Soul Calibur III.
What lies in her soul is a bond to destruction.
in Soulcalibur V's promotional material she is referred to as She who seeks uniting with the power of Destruction.

Born as the second youngest of 4 sisters Gwendolyn grew up in a middle class family in Holland. Her father was a skilled soldier and her mother a librarian.
Dissapointed with the fact he never had any son their father raised all of his daughters to be great warriors. Behind their mothers back he trained all of them in swordsplay with the classic long sword.

But in the events of the evil seed Gwendolyn lost her sanity and killed her father in a sparring match. When her mother found her daughter standing with a sword drenched in blood next to her husbands dead body she immediately ran to confort her daughter. she loved Gwendolyn regardless of what she had done. But Gwendolyn was still under the influence of the strong energy of the evil seed and killed her mother as well. the following events is still dizzy to her mind and it remains an unanswered question of what happened even to herself.

when her sanity slowly returned she found herself wandering in a forest where she encountered a black bird. A strange feeling of connection to this bird took its place in Gwendolyn’s heart and she followed it blindly. Soon it led her to a red glowing piece of metal. She did not know it this was a missing part of the cursed sword Soul Edge and once again her mind was controlled by its dark energy.

The shard that Gwendolyn had found took controll of her actions and she was led to Ostrheinsburg where she encountered a woman named Tira. Tira was currently looking for a new host for Soul Edge but when she introduced Gwendolyn to the evil sword Soul Edge considered her as unworthy and not strong enough to hold the huge amount of evil energy. Gwendolyn herself took this more or less as an insultment and a desire to prove herself worthy of such strencht grew incredibly strong within her. While Tira left to find another host of the sword Gwendolyn decided to become one of nightmares servants and grew strong enough to be its host.

The real reason for Gwendolyns incredible desire of becomming the host of Soul Edge laied within the shard she had found years ago. The shard always led her to the evil sword in order to be united with it once again. The longer Gwen had this shard in her belongings the stronger her connection to it became. Its desire to reuntie with Soul Edge became Gwendolyns own desire.

Gwendolyn continued to serve nightmare but for every day that passed the Azure Knight became more and more instable. If Tira did not find a new host soon the great nightmare would not last. To this Gwendolyn smiled, she knew that once it could no longer hold the energy she would be able to transfer it over to her own sword. With this great plan Gwendolyn smiled as she awaited her glorious moment.

But in her waiting an assassin found his way to the forest of Ostrheinsburg. His name was Hugo and he was a former member of the assassin organization Bird of Passage. He was a part of its first unit making his mission to find information. After that the organisation was seemingly destroyed in the evil seed he had dedicted his life in search of surviving members of the organisation in the name of revenge. He wanted to silent the organisation for all time. It had now led him into his search of Eiserne Drossel now more known as Tira. Gwendolyn knew that Tira had an agreement with Nightmare giving her his protection in exchange of her loyality but she herself was not as loyal as Tira. Gwendolyn made an agreement with Hugo to give him information about Tira in exchange of him keeping her from finding a new host for soul edge in time.

After that the evil sword had been destroyed Gwendolyn was devestated. She felt like a part of her was missing and it made her incredibly confused, she did not know what to do. At the same time the evil energy was slowly dissapearing from her body and mind leaving her with inquestions against her loyality to the sword in the first place. While Tira lefted to find the shards of Soul Edge to rebuild the sword Gwendolyn decided to search for her companion Hugo who had gone missing shortly before the evil swords destruction. Not trusting Tira Gwen cut the contact to her and they wouldnt meet for many years.

Gwendolyn spent the first following years in search of her lost companion Hugo, when she finally found him that much time had passed that the evil energy almost completly had lost its strong grip of Gwendolyns heart. But not only almost. The two of them worked together as a team and as they started a band of thives their relationship grew closer, eventually they fell in love. For many years Gwendolyn and Hugo worked as the leaders of their group of thieves and in rare cases also assassins. Briefly they started cooperating with Graf Dumas without knowing he´s connection to Soul Edge.

in 1603 Gwendolyn gave birth to her and Hugo's first child. It was a daughter that Gwen decided to name Dafne after her own mother.

Five years lateronly a few months before the events of soul calibur V Gwendolyn recived an unexpected visit form her old companion Tira. Tira only stays for a short moment but during their conversation Tira tells Gwendolyn that Graf Dumas is nightmare and before she leaves she hands her a shard of soul edge saying "do remember this?, I saved it just for you. I'm sure youve missed it" Then she leaves into the night in her search of Pyrrha.

Hugo notices the changes in Gwendolyn after that she had recived that shard of soul edge from Tira. Knowing of the evil energy and how it easily could corrupt ones mind he decided to take Dafne and leave, for their daughters saftety. Though he never told Gwendolyn herself where he went. Gwendolyn set out to find her man and child.

Already before she was under the influence of Soul Edge she was a gloat person and this is very well shown in her later appearences. She also is the jealous type but very strong and determind.

Gwendolyn is a tall woman with long hair. In all of her 1p appearences Gwendolyn has grayish brown hair, while in all of her 2p appearences she had dark brown hair. Her eyes are deep blue in SCIII, purple in SCIV and eventually red in SCV. She most often wears armour.

Gwendolyn defeats Algol but she does not kill him. Algol asks why such warrior shows mercy on which Gwendolyn replies "Mercy is a cruel word". She then starts to drain the power of Soul Edge into her own blade. As the power grows to strong her body starts to blend into a dark materia that is absorbs along the power of soul edge into her sword. As she slowly is devoured by its power Algol rises and grabs Gwendolyns blade. "you have proved your will to be strong but it is not pure, thus why you can not wield this power" Algol says. "foolish beast! I AM ITS POWER!" Gwendolyn shouts. Then Algol absorbs the power inside himself, proving he is stronger than her.

The screen fades to black, then Gwendolyn is seen alone on The Tower of Remembrance with her red blade lost of all its power. "The energy... Its gone!" she shouts desperately.

Gwendolyn is a welsh name that can mean white circle. 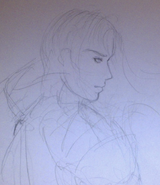 A finished sketch if Gwendolyn

Aquarell artwork of Gwendolyn in her SCIV ending
Add a photo to this gallery
Retrieved from "https://soulcalibur.fandom.com/wiki/FanChar:DeniseOberg:Gwendolyn?oldid=144925"
Community content is available under CC-BY-SA unless otherwise noted.