Start a Wiki
watch 01:51
The Loop (Games)
Do you like this video?
Fanon Article Ownership
This Fanon page was created and is owned by DeniseOberg (talk), and as such is not part of the Soul series canon.
Unless the edit is constructive and/or minor (such as fixing a template), please do not edit this page unless given permission from the author.

Mei-Xing is a fan character in the Soul series. She is a member of the Chai family but due to her bad relationship with her mother she now works at the Yan Family´s mansion as a personal body guard to Leixia and Leixin

In Soul Calibur V she is reffered to as The Swallow of Sorrow.

As a young man Chai Longwei, a member of the Chai family, traveled to the west on business trips. On one of his voyages he was effected by the evil seed. The strong evil energy gave him vivid hallucinations and the sailormen had to lock him inside the captain's cab. After that, the hallucinations ceased and he was sent back home and feared to ever see the sea again. He got married and settled down.
It wasn't until the birth of his second child, a daughter he named Mei-Xing that he finally dared to sail the seas again. What he didn't knew was that Mei-Xing had been effected by this one event and a very small amount of the evil energy that had lied within her father's soul had passed over to her. This tied the girl to always act sad and depressed. This sorrow wasn't very strong however and the love of her family kept her happy enough to go on with her life.

It was her elder brother Jiang who trained her with the Jian (chinese sword) from early age. But her mother was the one who taught her how to fight with the crecent shaped blade.

Her father made many voyages to the western world, when her brother turned sixteen and Mei-Xing was twelve, their father took her brother to join him on his voyages. For many years these trips where successes and Mei-Xing became very fascinated by this distant place. But at their fifth journey her father and brothers ship never returned.
Mei-Xing was filled with grief after this. She had never had any good connection to her mother so she was often alone, and as the ones who made her happy now were gone, the sadness within her soul grew. After some time she started to work as a guardian at other noble family manisions and soon began to work at the palace of the Yan Family. By order of Yan Wujin she was spending her time as a personal guard for his daughter and son, Leixia and Leixin.

She often spent her time sparring with Leixia when her mother couldn't, or when Leixia simply needed an easier opponent. She was even taught some moves from Xianghua herself. But most of her time Mei-Xing spent watching over Leixin, as he wasn't any good at fighting and often just sat reading while his sister and mother trained. Mei-Xing was set to watch over him.
She made fast friends with the two of them and soon they became like a family to her. But when Leixia soon fled away, wanting to be a warrior herself. Mei-Xing had deemed Leixia as a younger sister and she was very worried.
After that Xianghua received a letter from her friend Maxi about Leixia being safe traveling with him, Mei-Xing insisted in going to the west and bring her back. Xianghua whould love to do this herself but she was worried about leaving her son behind. So Mei-Xing left the Yan household and went west, but not just to bring back Leixia, also she hoped to find out what may happened to her father and brother's ship along the way.

Mei-Xing is a young woman with light brown, almost golden eyes. Her hair is long but is tied up (short in 2p) and very dark brown, can be seen as black at first sight. She has pale skin and is not very tall.
She dresses in white and blue themed colors, since blue symbolizes sorrow in European culture, and white stands for mourning in Chinese culture. Her dress is traditional Chinese and she has blue flowers on her hands and one in her hair.

Mei-Xing is a sad and mostly disconsolate character (caused by the small amount of evil energy inside of her). She is very honest and open with her feelings. It´s unclear what makes her keep on fighting. Her personalety is very smiliar to Amy

Mei-Xing fights with a crecent formed blade. Her moveset is fast and powerful but has a short reach. 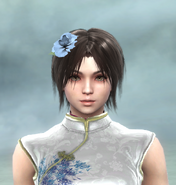 aquarell artwork of Mei-Xing in SCV

Mei Xing in her 2p outfit 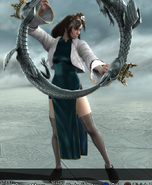 Mei Xing created with Tira´s fightingstyle
Add a photo to this gallery
Retrieved from "https://soulcalibur.fandom.com/wiki/FanChar:DeniseOberg:Mei-Xing?oldid=144926"
Community content is available under CC-BY-SA unless otherwise noted.