Start a Wiki
Fanon Article Ownership
This Fanon page was created and is owned by DeniseOberg (talk), and as such is not part of the Soul series canon.
Unless the edit is constructive and/or minor (such as fixing a template), please do not edit this page unless given permission from the author.

Has yet to make an appearence.

Lars Wolfgang Von Krone is a fancharacter created by user:DeniseOberg. He is the youngest prince of wolfkrone and son of Hildegard Von Krone.

Born with a weak left arm, Wolfgang had troubles learning how to fight with the heavy lance from his mother. But he refused to give up. With his patience he learned how to fight with a shorter lance and a shield.

(more of the story will be updated)

Wolfgang is a gentle and nice fellow who easily laughs. He is calm, optimistic, and has a weak spot for Ladies. One could describe him as a little bit of a womanizer.

Wolfgang's fighting style is not as powerful as his mother's (since of his weak arm) but it has great defence thanks to the shield.

Wolfgang is a Germanic name that is put together of the two words "Wulf" wolf and "gang" walk or path, meaning path of the wolf. 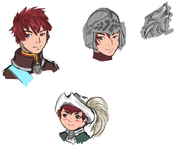 Sketches of Wolfgang as a toddler and as a young teenager.

Closeup on Wolfgangs creation in SCV

fullbodywiev of Wolfgangs Creation in SCV

Sketch of 16 year old Wolfgang with and without helmet

Quotes sketch of Wolfgang (and Dante)

Wolfgang and his pet dog Manfred

easy coloured sketch of Wolfgang
Add a photo to this gallery
Retrieved from "https://soulcalibur.fandom.com/wiki/FanChar:DeniseOberg:Wolfgang?oldid=144933"
Community content is available under CC-BY-SA unless otherwise noted.