Start a Wiki
watch 01:51
The Loop (Games)
Do you like this video?
Fanon Article Ownership
This Fanon page was created and is owned by Justice0 (talk), and as such is not part of the Soul series canon.
Unless the edit is constructive and/or minor (such as fixing a template), please do not edit this page unless given permission from the author.

"Fear is your ally, remember that the next time you fight."
— Akimaru

Joujima Akimaru (城島 秋丸 Jōjima Akimaru) is a Soul Series fan character created by Justice0. He is a wandering warrior who travels the world to teach the warriors he meets the ways of the true way of the warrior and slay all evil he comes across. His primary weapon is a katana with a black blade named Karasu.

He is referred to as A Hero With No Home.

Akimaru is a heroic looking middle-aged man with black hair that is starting to become gray and darkbrown eyes. He has a scar on his face from the battle he fought back in the 1500s and wears a kimono that has the crest of his family marked on it and he also wears tan hakama that has the kanji "魂" written on the left leg. He wears the samurai armor that he wore into battle in Sekigahara and also wears a Buddhist bead necklace.

Eversince he was a young boy, Akimaru had wanted to become a samurai and travel the world in search of the greatest warriors, and because of his will to become a samurai, the Oda clan had recognized him as a boy with a burning soul who was going to become an excellent warrior, so he was put as Akechi Mitsuhide's disciple by Oda Nobunaga. As Akimaru aged, he had became very loyal to his master, Mitsuhide, and had followed him until he had betrayed Lord Nobunaga in 1582 and died a month later. After Japan was unified by Tokugawa Ieyasu in 1600, Akimaru had became masterless and had remembered the words of his master before he betrayed his lord: "Live on as a samurai, not to be loyal to anyone, but to become a true warrior." In 1604, Akimaru had began to travel around Japan and had found many samurai who had became bandits, children who are punished for wishing to become samurai, and lords who have forgotten ways of the samurai, so he had left Japan in search for people who still believed in the ways of the warrior and cut down any evil who attack the innocent, creating a new fighting style he calls "Aku-Zan-Ryu" (悪斬流 Evil Slaying Style). In his travels, he breaks the sword that was given to him by his master by another travelling samurai named Mitsurugi and but was impressed by his swordsmanship rather than being depressed by his lost. Later after his defeat, he meets a strange blacksmith who fixed his sword but had turned the blade black; not knowing what was going on, Akimaru had turned to the blacksmith in anger for ruining his master's sword but he responded that it wasn't his master's sword but rather a new and stronger one just with the same handle, so he then called it "Karasu" (烏 Crow) and paid and left without saying a word, just continuing his journey.

Black Feathers - Akimaru primes his sword, while saying "This is...". He then does an uppercut and air uppercut then slashes downwards, knocking down his opponent, and finishing his quote by saying "...the end!" as crow feathers fall down.

Akimaru's name comes from the Japanese word for autumn, "aki" and his last name, Joujima, means "hand over peace."

Close up view of Akimaru 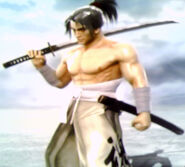 Akimaru 2nd costume
Add a photo to this gallery
Retrieved from "https://soulcalibur.fandom.com/wiki/FanChar:Justice0:Akimaru?oldid=144415"
Community content is available under CC-BY-SA unless otherwise noted.