What lies in his soul is Retribution.

In Soulcalibur V, he is referred to as The Purified Swordsman

One of the most prominent in a group of traveling swordsmen, self-proclaimed keepers of peace. Despite their apparently noble intentions, they were thieves and swords for hire. Masters of both stealth and combat, they called themselves the Silver Phoenix. Unaffiliated with the Fu-Ma or any other clans of ninja, they never sought conflict, only responded to it.

One of their contracts set Koja's story in motion. A contract from overseas, through the rest of Asia and into eastern Europe. It was a rare opportunity for the clan, and the amount being offered for their services was staggering. There was debate among the clan over who would go and how many men would be sent, but it was eventually decided that only two would take the contract: Koja and Mariko.

They left immediately, traveling with a group of pirates until they hit land. While they approached their destination, they took on smaller contracts to keep themselves supplied with food and money. Most were finished with little trouble, as they mainly involved fighting against poorly-trained wanderers who thought they could make it big.

One of their encounters changed everything. A large group of Malfested had raided the village they were returning to for the night, and had either killed or dragged everyone off. They'd colonized the village as their own, and were being ordered by a woman dressed in black.

Koja and Mariko attempted to fight them off, but were separated in the battle. Koja lost his shuriken in the fight, and Mariko was dragged away by a heavily-armoured man. The last thing Koja saw before being knocked out by a sword's handle was a shard of glowing metal.

When he awoke, he felt different. No longer did he feel any fatigue or hunger, and any emotional distress he'd felt had disappeared. He looked over himself in curiosity, noticing the physical changes he'd taken on. He looked sickly, and when he spoke, his voice echoed slightly. He'd been Malfested.

The person who had ordered the contract from his clan entered the room, holding a scythe and the shard of metal. Koja reacted to his commands instantly, unable to resist or even think for himself. The man held the shard, and Koja was compelled to listen.

Once he was given his orders and a new sword, he set off to fulfill his contract: Kill a traveling warrior that was approaching the castle.

His attack failed, and he was defeated by his target. The man's sword purified him of his Malfestation, and he was determined to help fight back. He remembered little, only that his friend was gone and that he had been manipulated. Whoever did this to him would pay.

Confident, perhaps a bit too much. Finds fighting to be more of a game than anything, and likes to show off in fights. Despite this, he's extremely disciplined and can find his way around a more skilled opponent with relative ease. He may not win, but he believes escaping and surviving to fight another day is better than dying. He can be serious when he needs to, but tries to keep everyone's moods up however he can.

Koja fought with a Katana and Giant Shuriken in Soulcalibur III. Since it was not present in either Soulcalibur IV or Soulcalibur V, it has been replaced with Mitsurugi's fighting style.

The Phoenix Blade, as it is called in Koja's story, is a sword passed down through his clan. It was made to kill demons. The blade's name comes from its ability to produce fire, as seen in Koja's Critical Finish and Critical Edge. Despite the powers and the fanciful name, it resembles an ordinary katana, or in SCV, a straight sword.

Koja runs his hand along the back of his sword, then bends low to the ground and swings his blade behind him. The screen blacks out, and four quick slashes of flame tear through the darkness. The sound of metal rending his opponent is heard, and when the screen returns, the opponent shrieks in pain as they fall over, engulfed by the sword's fire. Koja stands, swings his blade off to the side, and spins it before stabbing it into the ground and crossing his arms.

Koja lowers his sword, and as it is engulfed in fire, he proclaims his excitement. The screen darkens slightly as he slashes upward, knocking his opponent off their feet. Time slows down for a moment as Koja readied his next strike, and slams the opponent back down with his flaming sword. 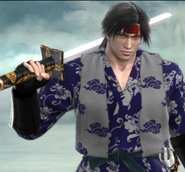 Add a photo to this gallery
Retrieved from "https://soulcalibur.fandom.com/wiki/FanChar:Koja_Tengu?oldid=100117"
Community content is available under CC-BY-SA unless otherwise noted.