Start a Wiki
Fanon Article Ownership
This Fanon page was created and is owned by SoulGauger (talk), and as such is not part of the Soul series canon.
Unless the edit is constructive and/or minor (such as fixing a template), please do not edit this page unless given permission from the author.

"Im the will and the power of Soul Edge"
— Maleficent Elysium

Maleficent Elysium (悪事を働くエリュシオン,Akujiwohataraku eryushion) is a character in the Soul series. She makes her appearance in Soulcalibur:Dawn of Destiny as a major antagonist and the final boss. She is the new spirit and will of Soul Edge.

In her new Soul lies: Revenge

Maleficent Elysium is a graceful woman with greyish skin, white hair and a demonic right arm. She has orange glowing eyes and is wearing revealing attire, similar to a Greek goddess. She wears black cloth covering her cleavage, under a semi-transparent sheet. She also wears a semi-transparent miniskirt over black 'panties'. She wears a greek cloth solea on her feet. And a cloth on her left arm, and a white bracelet on her right wrist.

" Good bye Mother..." were Patroklos' last words after he defeated Elysium in the final conclusion of Soulcalibur V.

As Patroklos walked away for a happy ending with his sister Pyrrha who was finally free from the possesion and grasp of Soul Edge. He was oh- so happy, yet little did he know that there was an even bigger horror awaiting him.

Above in the sky in of Utopia of the Blessed, Elysium didn't fade away entirely after her defeat. Her face was still viseable as she watched up and saw a strange red fog coming near her, for it was something she's never seen before.

The mist started transforming as it got closer to the ground. Elysium was slowly fading away, but still dared to watch. She noticed that the fog sas forming a shape of a weapon. Elysium dared crawl over to it with her last breath and power. The fog was gradually disappearing the more it transformed. The weapon illusion was standing at the staircase of Utopia of the Blessed as the defeated Elysium came closer to make a grab for the said wepon.

As soon as the red fog was gone, Elysium reached out to the sword which was almost invisible after her defeat by Patroklos. Elysium gave her all to touch the sword. She took her hand and gently traced the sword, but when the tip of her finger touched the eye of the red sword, she got sucked into it. The sword began to glow a bright light and it then flew up.

As the blinding light disappeared, the sword started lighting up and a lightball came out from its eye and landed next to the sword. As it took form of a girl, it spoke, " It worked... I am free... once again, but not now as the spirit of Soul Calibur... No! I am now the spirit of Soul Edge!"

The forming of Elysium was complete as she picked up the sword and looked at herself through the mirrored floor. " What happend to me....... I have changed........ yet i am whole again........" she questioned to herself.

Before she completely vanished from the Utopia of the Blessed she stated, " I am no longer Elysium the spirit of Soul Calibur. No i am Maleficent Elysium the siprit of Soul Edge!"

The resurrected Elysium now known as Maleficent Elysium is a total diffrent spirit now as she was the former spirit of Soul Calibur, now she is known as the spirit and will of Soul Edge and became an evil threat and completely changed her personality when it was changed by Soul Edge. She is basically the complete opposite of Elysium .

Maleficent Elysium's style was completly altered due to her new sword Soul Edge as she also improved her skills and style which allows her attacks to cause more damage then before.

Spirit of the punishment: Maleficent Elysium will hold up her blade as the ground opens and gives Soul Edge energy to make a fireball, she will unleash it against her opponent what will cause a lot of damage.

Maleficent Maelstrom: This special move used with Maleficent Elysium drains the life bar of your character to a One-Hit move status and also it will drain the half of your Gaugemeter 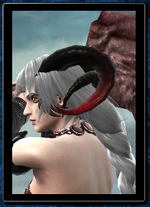 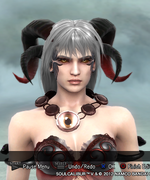 close up on Maleficent Elysium in her 2p 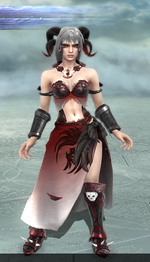 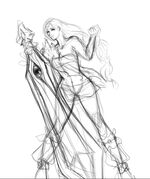 Concept Art (1) of Maleficent Elysium, that will be improved in time (created by DeniseOberg) 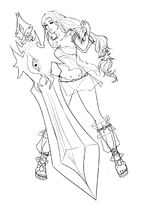 Concept Art (2) of Maleficent Elysium, that will be improved in time (created by DeniseOberg) 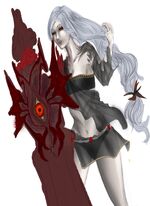 Concept Art (3) of Maleficent Elysium, that will be improved in time (created by DeniseOberg) 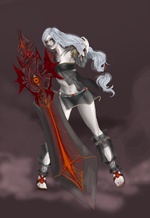 Maleficent Elysium in her offecial art SCDD
Add a photo to this gallery
Retrieved from "https://soulcalibur.fandom.com/wiki/FanChar:SCDOD:Maleficent_Elysium?oldid=140219"
Community content is available under CC-BY-SA unless otherwise noted.