Her early years revolved around the church. This was due to her parents giving her to the church of France upon her birth. They were not prepared to raise her and they bore not a heart to leave her for the wild dogs to tear at her flesh. So she was delivered here. From the tender age of five she began to sing. Her talent had begun to spread across France and soon enough, she had a small amount of fame. As the years progressed, she had grown but she had also come closer to God.

As she sang, she was the main attraction for those whom wanted to heart the choir sing. Her voice was phenomenal. Enchanting the hearts of those whom were against Christianity as well as those whom were allied to it. Even more so, to add on to her growing popularity, she was to sing in a choir. Not as a mere member, but as a focal and lead. It brought her much attention and much adoration; something which she was not used to but immediately offered her praises to the Lord above whilst claiming it was of His doing for her to bear a voice as such.

In two years time, a priest had come from afar just to hear her sing and it was unknown to her that he would be within the church listening. Though as he heard her mellifluous voice travel amongst the halls of the small church, his ears were immediately elated and his heart was set aloft. The priest offered to take her to Parousia so that she could perform within their main cathedral yet, Noémi was to initially decline, yet that is until Sister Helen convinced her to take the opportunity to share what was gifted to her.

It took not long for Noémi to decide on what to do and when she had decided, she let her (Sister Helen) know first.

She was to travel to a cathedral within a distant land. Despite not wanting to leave what she has known for so long, Noémi accepts the path which was laid out for her and follows it.

Noémi was instructed to learn a plethora of music so that she could perform within the coming week. It was unknown to her that the Emperor himself would be present when she sang. As she began to learn the music which she was assigned, she was interrupted by a woman. Upon conversing with this woman she learned of her name to be Annebella. Additionally, she also learned that she was going to be one of the soldiers guarding the entrance to the church during her performance. As they spoke, Noémi learned of a threat which had been present within Parousia. There had been thieves which roamed and searched for those whom were unaware and more importantly, alone during the night.

Annebella warned her to be indoors before nightfall. Heeding this warning, she bowed and thanks the soldier and continued on with her lesson.

A few days had passed after her meeting with the soldier Annebella. As she closed the doors to the church, she quickly set off to her dwelling. It was only a fifteen to twenty minute walk and she walked rather quickly when she had not been engaging in conversation with another. Though that made no difference. Less than ten minutes into her walk, she had been ambushed. Three men had enclosed her in a circle and when they did, she demanded what they wanted. Words they spoke yet they were filled with hatred and lust. As her tunic was ripped open, she screamed.

An ear splitting shriek it was and one which could rival that of the mythical Banshee. One of the men had recovered from being temporarily disoriented and quickly struck her across the face and as she fell, two of them worked together and lifted her, from there they began to carry her off until she was dropped. As she slammed against the stone ground one of the men fell to his knees and regurgitated blood upon her pallor flesh.

As the other turned to their new opponent, they were shocked to see a woman. Noémi on the other hand knew who it had been. This is why she screamed because she knew Annebella was near by. As she was rushed, Annebella grabbed the man's arm and disarmed him of his dagger and as she stripped him of his weapon, she kicked him away and stabbed the second man whom was rapidly approaching from her left. A second stab. A third; and finally a seventh. Ripping the dagger from his chest, Annebella placed her palm against his forehead and gently pushed him away from her only for him to fall to the ground--motionless.

Swaying backward, she was not fast enough to evade being cut by the last remaining man. As she stumbled backwards she was again injured by her opponent. This time it was far more severe than just a mere stab wound. Annebella had suffered a tear which was nothing but a mere stab wound. Yet with her constant movement, the wound had festered and tore into new and undamaged areas of her body. Seeing this, Noémi got off the ground and grabbed a dagger which one of the men had dropped. As Annebella evaded yet another strike she feinted a charge and then parried the man's incoming attack.

With this opening provided to her, Noémi closed the distance and lunged with a thrust of the dagger. Ripping even deeper into his flesh, she added additional gorce behind the dagger which now pierced his heart. It was not long before he collapsed in a pool of his own blood.

Her Role within Relic

Within Relic, Noémi is the Medic and carries items which are used to treat a wide array of injuries. Items such as but not limited to: Needles, herbs, bandages, blades gaws, etc. There is also a machete within her possession for if she would need to make an unfortunate individual an amputee. Despite being capable with her weapons, she prefers to treat the wounded.

Contrition: With her cutlass, Noémi will bound against her opponent. This means she will remain in a state of defense until she sees a wide and clear opening. The only area she will not attack is the sexual organs of others. Yet, her style of combat is reducing the need of excess struggle and ending things as quickly as possibly. She uses this weapon until it is destroyed during the battle within Untide, Maletta.

Penance & Reprisal: Are her new sword and shield which she acquired from Girardot after her previous weapon shattered.

Noémi is proficient with a cutlass as well as basic soldier combat regarding a short sword and shield. Annebella taught her how to evade and also showmanship when it came to the way of the rapier, also, she had learned to not only parry her opposition but to deliver fatal counters with ease. Noémi does not enjoy toying with her opponent for fun, she only misguides their eyes and they’re assumptions. As such, she does not fight for fun, she fights to survive and by doing so, she holds nothing back and she refuses to give up until she is cold and dead.

Weapons as of Act: II

Penance (shield) is mainly used to attack the enemy while Reprisal (short sword) is used for defense. This disparity of swordplay confuses most and tricks most into believe she will only attack with her shield until they are caught off guard and impaled by Reprisal. Noémi confuses her enemies before she delivers a combat changing blow to her enemy—much like with Contrition—although with Reprisal, the attack she delivers is usually fast and fatal. With shield and short sword at arms, Noémi excels in defense and parries. She is also very capable of delivering devastating attacks with her short sword Reprisal.

Oft quotes passages from the Bible.

Noémi sings in the choir in the main church of Parousia.

Noémi places religion above all else and will not only argue but can even be drawn into a physical altercation if things cannot go in her favor when Christ is involved.

Offers praise every morning and every night and before every meal.

Noémi's Gallery of Act I 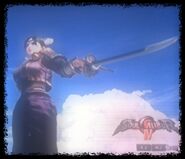 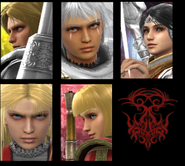 Retrieved from "https://soulcalibur.fandom.com/wiki/FanChar:Snowsfall:No%C3%A9mi?oldid=138379"
Community content is available under CC-BY-SA unless otherwise noted.