Start a Wiki
watch 02:21
The Loop (Games)
Do you like this video?
Fanon Article Ownership
This Fanon page was created and is owned by SoulGauger (talk), and as such is not part of the Soul series canon.
Unless the edit is constructive and/or minor (such as fixing a template), please do not edit this page unless given permission from the author.

Practice Blades (when he was learning the lessons from his mother)

Teached by his mother

Luke Scott (ステフヴィンスン, Ruku Sukotto) is a character in the Soul series. he is making his first appearance in Soulcalibur V.

in his soul lies Confidence

Luke Andrew Scott (Luke) is the son of a Legendary fighter, Leandra Scott. Luke is a 15 year old boy who enjoys every moment of life he can, and spends most of his time with his mother. He was born in the city of Ostrheinsburg after the events of Soulcalibur IV, in a safe house that his mother bought from an old man. The house was their safe point, where no evil was found.

Luke was born far away from everything that happened in the past, When Luke was born there was no father in the family. His mother never talked about him to her son, she always told him that he died before his birth. When Luke was 8 years old his mother thought is was time to begin a new journey. Leandra told her son that is was time to move on, but Luke didn't want to go away from the safe place where he was raised. After some time they left the city of Ostrheinsburg to head for another city

On their way to another place to live Luke became stronger and bigger, and his mother began to tell him of her past, about the clash with Cervantes and her lost brother and her many other battles. Luke wanted to become like his mother- a skilled Dual Sword Fighter, a legend. His mother began to train him to get the hold of the Dual Sword technique. She taught. him everything she knew.

When Luke became 15 years old he already mastered most of the weapons' skills. He and his mother began to fight any enemy who crossed their path. One day when they walked towards a wasteland, they saw dead bodies everywhere. "What happend here mom?" Luke asked. Leandra didn't know what happened, but they saw a young boy standing on the otherside of the wasteland. When Luke asked him what happened, the young man answered: Soul Edge has come back to life.

Leandra and Luke knew what they had to do. This was the start to their biggest journey ever, to stop Soul Edge, and together they walked towards the new adventures that lay ahead in front of them.

Luke and Leandra traveled many months and had many adventures behind them. They met a lot of new friends as well. Luke got to know Leandra's best friend Xander Alondite. Xander taught Luke also some new skills and tricks to battle powerful opponents. He also got to know an other good friend of his mother the Oni-Neko named Sakura. She was, in the beginning, a little shy but later Luke and Sakura became good friends.

In the times after Luke's freeing of the evil inside him he returned to his mother with a guilty feeling that he betrayed his mother for being evil against her Luke had to fight his own mother (the only family he had) that was a big guilty feeling for the young warrior but he was ordered by his master at the time to kill his mother and her companoin.

When luke got home his mother was nowhere to be seen, she was on a journey after she free'd Luke from the evil that consumed him but he went to find his mother cause he thought where she was to be found

His mother told him about the Oni-Neko Sakura, these 2 had to be her children, Luke walked near the two busy children

I am looking for my mother do you know where she is she had gone off and i must find her to help he, I know she is on her way to find an evil creature called Nightmare he had done something to my mothers face and now she wants revenge on him and knowing my mom she isn't coming back until she got her revenge

i haven't seen her around Luke maby she is gone off to the dark caves of death, (those are dangerous caves Hanako intrerrupted).... but i think youre mother might be there Hitoschi said

Luke thanked the two young lads and walked off to find his mother in the caves of death.....

Some time later Luke arrived on the stage where the caves of death where hidden and he had to find his mother Leandra somewhere around there....

Luke Scott is a brave young lad who doen't fear a good battle and not even against his own Mother] as she didn't like that her son was beated by her he said Come on Mom, because i am your son you do not have to hold back

Luke learned his fighting ability's from his mother Leandra as she teached him all the skills and ability's she has learned from her adoption father Thomas as she passed it on when her son was old enough to fight and was learned to handle two swords, as he became better and better Luke wanted to battle his mother to see or he could beat her as he wasn't able to Leandra said

Keep training and you will defeat me once

Shining Moon Swords: These swords created from the remainings of the Soul Edge Twin Blades by Leandra are his own weapons now as his mother received The Master Dual Swords from Edge Master she passed the blades upon to Luke as he took them with pride he became a better fighter with these blades

In future: Chapter 6 it has been revealed that Mitsurugi is Luke's Father when

Luke training with his mother Leandra

Luke in training with his mother Leandra

Luke with an new armor (named: Spirit armor) created by The Master Dual Swords of Leandra 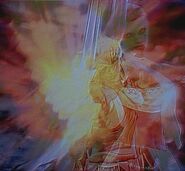 Luke battles in a costume (who is almost the same as Leandra is wearing)
640px-Luke and Hanako.jpg
A picture of Luke and Hanako that was made by the Little Sister of (Sakurasyoaran124) 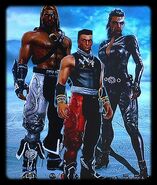 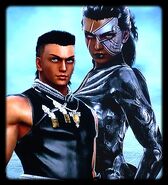 Luke and Leandra (son and mother)
Add a photo to this gallery
Retrieved from "https://soulcalibur.fandom.com/wiki/FanChar:SoulGauger:Luke_Scott?oldid=140085"
Community content is available under CC-BY-SA unless otherwise noted.