17 (Soulcalibur: Birth of The Brotherhood)

rkus (アク, Ku On; Greek: Αρκυς, Arkys) is a character part of the Soul series. He made his first appearance in Soulcalibur IV, and returns in Soulcalibur V in a new incarnation.

During the events of Soulcalibur IV, Arkus was a Young European man raised somewhere in Asia. He heard stories about Algol and how he was able to withstand the power of both Soul Edge & Soul Calibur and he had to see it for himself. He is on a quest to find both Soul Swords to see if the legends were true. once he got to the Tower of Remembrance, he has encountered Algol and eventually defeated him in a duel. Once Algol was defeated, he grasped both Soul Swords and now his name was engraved into history.

Arkus II is now a Master and is the leader of his own Brotherhood. He fights along with his best friend, Mustafa in hopes of finding a new Wielder of Soul Calibur.

In Soulcalibur IV, Arkus appears to be have both European and Asian Descent but is shown to be wearing Asura armor showing that he was raised somewhere in Asia. In his 2p costume, he is wearing paladin armor.

In Soulcalibur V, he has been reincarnated and has a similar appearance like he did in Soulcalibur IV with the exception of having bright eyes and shorter hair. He is also more modern looking but still wields a weapon.

In Soulcalibur IV, Arkus was very cocky as of Soulcalibur V, Arkus II has a short temper and anger management. Based on his quotes and appearance, he is a very intimidating character too. Arkus II is a Chaotic Good Character

Arkus wields a Zweihänder in both games. He holds his Zweihänder with both hands and can deal powerful attacks. However, his attacks are slow but he has good reach. He has the same moveset as Siegfried and is a Mid-Tier Character.

Not much is known of how he had the Requiem, but it could be that Siegfried must of passed it down during his encounter.

When he finally defeated Algol, he got his hands on Soul Calibur in his ending in Story Mode. He uses it until he is able to become its final form.

When he activated Soul Calibur, he used it to defeat Nightmare.

This was his primary weapon that was passed down from his father. His version of the Ōdachi is reformed and has a green metallic blade. 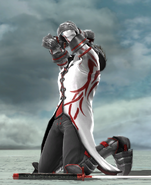 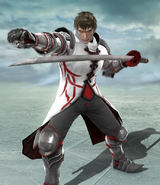 Arkus wielding his Odachi
Add a photo to this gallery

Add a photo to this gallery
Retrieved from "https://soulcalibur.fandom.com/wiki/FanChar:Xlr8rify/Arkus?oldid=128855"
Community content is available under CC-BY-SA unless otherwise noted.