From the Future Soulcalibur IV

Renegade (背教者, Haikyō-sha) is a character that appears in the Soul series. He made his first appearance in Soul Calibur IV and returned in Soulcalibur V. He is a futuristic character and what lies in his Soul is Order.

In Soulcalibur IV, He appears to be a hooded man who never reveals his face He has red and blue colors to match his saber. In his 2p Costume, he is wearing tech armor.

In Soulcalibur V, his entire body is bandaged with a blue logo on his chest. His alternate outfit is just a color swap of his 1p Costume. He has a similar appearance to the Elite Soldiers part of The Pact with the exception of wearing a hood instead of a cape. He also has black armor and wears a unique spaulder on his left shoulder. He also has a unique symbol on his breastplate.

Renegade was on a mission with his brother, Night Devil. They were on the search for the Soul Swords, Soul Calibur and Soul Edge for study purposes.

On his way to recover Soul Calibur, he had to defeat the Wielder, Siegfried. Renegade eventually failed and died as Siegfried got the best of him.

In Soulcalibur IV, he wielded a Saber Sword. He also had the power to levitate, shoot lightning and use the force. He had the same move set as The Apprentice.

In Soulcalibur V, he wields any weapon just like his Brother, Night Devil. He had the same moveset as The New Edge Master Kilik.

Renegade used to be very laid back, cocky and taunting. In Soulcalibur V however! he became a very dark character and was thought to be evil. He is considered to be a Good Aligned Character. 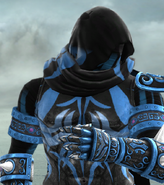 Updated Version
Add a photo to this gallery
Retrieved from "https://soulcalibur.fandom.com/wiki/FanChar:Xlr8rify/Renegade?oldid=117861"
Community content is available under CC-BY-SA unless otherwise noted.