Not much is known about Clifford's childhood, but he was never born into The Brotherhood unlike his fellow companions and never started out having a crew of his own. However, he was an adopted child who never knew his parents. He had Caucasian parents and did good in school. Though he was never born in The Brotherhood, The Agency had something against him and eventually took him captive.

He was childhood friends with Mustafa and when he heard the news, he rescued his friend and offered him to join The Brotherhood to defend against the corrupt agency.

Help a Brother Out

Weeks after Mustafa discovered the truth about The Agency, his friend was in a little bit of trouble with Agent, Leo Shin.

Unlike his fellow Brotherhood Members, he is dressed up more casual and less obvious than the others, making him a Member in Disguise since he doesn't wear any robes of some sort. He is shown wearing a Beanie cap, and a jacket. Fresh also carries a duffel bag with him at all times for an unknown reason.

Fresh wields Nunchucks and can link all of his combos together, making him almost unstoppable once he attacks his opponents. He is a High-Tier Character. He shares the same Moveset as [[Maxi

Rampaging Dragon: Fresh punches his opponent twice, and finally blasts them with an elbow finisher.

Fresh is very cocky and not that bright either, but he is still considered very lawful even though his appearance is more of a gang member than someone that is part of the law. He is a neutral character

Helped Riley hunt down The Tagger 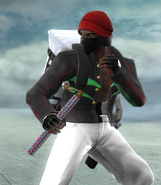 Picks
Add a photo to this gallery
Retrieved from "https://soulcalibur.fandom.com/wiki/FanChar:Xlr8rify:Fresh?oldid=117251"
Community content is available under CC-BY-SA unless otherwise noted.