"What do you hope to accomplish?"
— Havok Cross

Havok Cross (ハヴォ・ロッ) is the Main Antagonist and leader of Abstergo. He made his first appearance in Soulcalibur V.

What lies in his Soul is Power

Havok Cross is the founder of The Agency that had a different viewpoint of the world. The Agency is rumored to be a corrupt order involved in many criminal acts. Havok wants to make the world perfect by overthrowing American Democracy into a Dictatorship with the power of The Cursed Sword.

He uncovered the remains of a Demon Shard somewhere on his trip to Europe. When he picked up the shard, it immediately transformed into a cleaver. This also stole the pigments of his body making his skin and Iris' pale white and was often obsessed with souls. "I will.....gather.............Souls....for you," Havok said to the sword. "I..........I will revive....you Soul Edge.

Years after he discovered the shard, he was able to contain his obsession but instead wanted more power. Rather than destroying Soul Calibur, he wanted the powers of both swords to become unstoppable. He then sent out his agents to find the Soul Sword.

Havok wears a full work suit with a badge on his collar. He has Pale ghoulish skin and red eyes due to Soul Edge feasting on his soul giving him a vampiric appearance.

For his alternate 2p costume, he is dressed up in tech armor with a gladiator like appearance. The armor is a tinted gold with a red symbol on the breastplate which matches his badge on his suit.

Havok holds a Zweihänder with one hand. His attacks aren't that strong but he is very fast and usually launches his opponents in the air. Though he isn't the strongest, but since he is fast, he can do very overwhelming combos usually giving the opponent a hard time to fight him. He is a High-Tier Character. He has the same moveset as Nightmare.

Havok Cross raises Soul Edge and says "Taste power...", and does one heavy slash to knock his opponent to the ground while saying "Now begone!". It can be charged to do more damage, and even kill some characters in one hit. The first few frames of his Critical Edge can Guard Impact attacks (slightly longer if charging), but it will do less damage to the opponent.

He discovered Soul Edge in its Critical State. Once he took hold of it, his body was infected and now he is obsessed over souls.

Havok kept this hidden from curious members of The Agency.

When he let Soul Edge recover, it was now whole once again and it completely took over his mind.

After he took the power from Soul Calibur His body was infused with both weapons making him unstable and it eventually destroys him. Due to this, he loses all of his skin and hair pigments and turns into a ghostly white color.

Havok has a charm of persuading people and often believes that he is all powerful. He also doesn't care for anyone and is thirsty for power. Havok is a True Evil Character.

Night Devil is his personal "Android"

The Agency is a set up group of agents that are trying to purify world order and overthrew the American Government.

The Militia is associated with Havok Cross. They were responsible for attacking Riley Lind's Family. 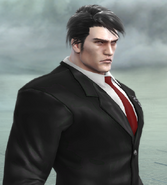 Havok's Malfestation
Add a photo to this gallery
Retrieved from "https://soulcalibur.fandom.com/wiki/FanChar:Xlr8rify:Havok_Cross?oldid=117257"
Community content is available under CC-BY-SA unless otherwise noted.