Maria and Richard (Both Deceased)

Henry Lind (ヘン・ィン) is a Character in the Soul series. He made his first appearance in Soulcalibur V. He became a sleeper agent and a Secret Assassin of Havok Cross.

What lies in in his Soul is Hate

Henry has similar colored hair to both Riley and Nina. He is shown wearing massive gauntlets, a Beanie Cap and a thief's mask. He wears the mask to hide some of his identity.

In his 2p costume, he is wearing Tech Armor similar to Renegade's armor but reveals his face and leaves his hair grown out.

Henry was the oldest child of the Lind family. Even though he is older, he never understood why they were "hiding" at the time. Henry Lind was 16 years old and was considered to be a lot of trouble. He didn't have a lot of privileges such as training with his father, Richard due to his behavioral issues. He was often jealous that his little brother, Riley was the first one to learn how to safely wield a weapon. This made him into making his own weapon, The Gun Sword.

His new weapon was at it's finishing touches. He went to go show Riley his invention he has created and "test it" out. His plans were interrupted when a militia arrived to their home and started firing at their houses. After his mom and dad got killed, he seemed to have shown no emotions to his deceased parents. Riley was already far from the farm and Nina had Henry as her only hope for survival. But for his chance to escape, he didn't want to deal with anyone else and shot Nina to escape. By the time he was done with her, he then got captured by The Militia Leader, Havok cross.

After seeing Henry "kill" his little sister, Havok offered Henry a deal for choosing the "right" path of becoming one of the agents. You were raised under a corrupt order. "Your family was Malfested and you would have became a monster until I found you. Having the urge to kill your sister without hesitation was pretty impressive, "Havok had a charm in his voice that made sick and confused Henry to believe him. "You, come with me, and we will cleanse this world together by taking out the corrupt order, the malfested creators part of The Brotherhood. You will be my Assassin for now on." Henry then left his burning home with The Militia.

The Man With The Pistol Sword

Eight years have passed after he joined the agents and obtained new weapons with his pistol sword. He also wears a face mask over his left eye possibly due to the fact that he is brainwashed. Weeks before he was able to hunt down the Soul Sword, he found out that his younger brother was still alive and it became his priority to hunt him down.

Unlike Riley and Nina being calm when fighting. Henry is a very aggressive fighter. He is often very hard to fight against due to him being very fast with his dual swords and the advantage of have both long and short range attacks. He shares the same moveset as Cervantes de Leon

This sword is a long curved bladed sword. He still keeps the same pistol sword with him. This sword has green blade and was rewarded to him after he has finished with his training. This is used as his primary weapon aside of his gun sword.

Henry shares a similar personality with both Arkus and Renegade, exept Henry is a lot more cold and dark than the others because Henry is an Antagonist. Even though it is stated that he has some mental issues, he is also not very stealthy or obvious.

Has jealousy over Riley Lind for being more "Privileged"

Pursued by Nina Lind for shooting her 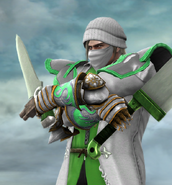 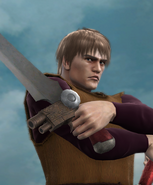 Henry as a teen
Add a photo to this gallery
Retrieved from "https://soulcalibur.fandom.com/wiki/FanChar:Xlr8rify:Henry_Lind?oldid=138745"
Community content is available under CC-BY-SA unless otherwise noted.