What lies in her soul is Freedom

Katjaa may be odd looking, but she is a free spirited person. She is a person who was raised by cats most of her life so her outfit is mostly tiger themed with cat ears and the tail. She is shown wearing the Hunter's Suit which reveals her navel underneath her Sleeveless Kimono and a long clothed skirt.

Katjaa wields a rod. She has an unusual moveset and some of her moves are silly due to her personality. She also has both long range and close range and can put in a lot of combos using her kicks. She has the same moveset as Xiba.

Katjaa is a very free spirited person and is very loving and enthusiastic. She is a very charming, yet fierce fighter that shouldn't be underestimated. She is a Neutral Good Character.

Had a crush on Riley Lind but later finds out he has someone. They become close friends.

Traveled with Nina Lind to hunt down her brother Henry 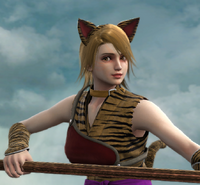 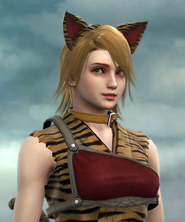 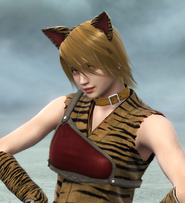 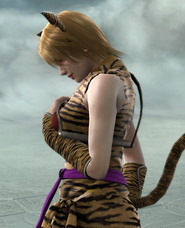 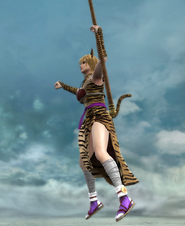 Add a photo to this gallery
Retrieved from "https://soulcalibur.fandom.com/wiki/FanChar:Xlr8rify:Katjaa?oldid=117319"
Community content is available under CC-BY-SA unless otherwise noted.