Rhombus Rod (When he was young)

What lies in his soul is Honor

Mustafa along with his father Abdul were refugees of the Second Sudanese Civil War and looked for a new home in the United States.

A group of agents were also involved with the war and raided Abdul's village in 1999 shortly after his first born child was born, Mustafa. When the agents broke into his home, they killed Mustafa's mother and searched the house for the fragment of Soul Calibur he has uncovered. They eventually gave up the search because they believe he was gone but they never checked for signs of the Soul Sword. After Abdul escaped the village, he then decided to escape from the agents and seemed refuge with his new born son without a mother.

"Why have we come to America father?" Mustafa was five years old and was always on the run with his father. His Father, Abdul was unable to settle into one home due to him running from The Agency. "To seek refuge," Abdul said to Mustafa. "But we haven't found somewhere to stay, father," Mustafa said to his father.

The two eventually stumbled upon an empty apartment complex. "We'll have to stay here, son. They won't find us in here," Abdul said. They walked into the complex, the complex was still in great condition. "Why was this place abandoned, father?" Mustafa asked. "I don't know, but this place was still in good condition." Abdul noticed that there was running water and beds left over in the barren apartment. "This could be our home, dad," Mustafa said in joy. "Yes, son. This can be our new home. They can't detect us here."

Until late 2005, an older boy by the name of Arkus II was sent away after the death of his father. He was a few years older than Mustafa was. He was carrying a large katana with him.

"Sorry about your father," Abdul said to Arkus. "We were close friends and I am also shocked from the news." Abdul brought Arkus inside.

Once they entered the den, the first person Arkus met was Mustafa. "I didn't know Abdul had a son," Arkus said. "We could of been friends a long time ago." Mustafa was silent. "So... Why are you here?" Arkus asked Mustafa. "I don't know, my father said shortly when I was born, we came here to hide," Mustafa said. They started to know each other for a little and then started to build up a friendship.

As years have gone by, Mustafa was a lot more agile than before. At 11 years old, He was constantly training with his father everyday. Abdul wasn't really doing well. Due to his age, he has gotten worse over the years and was no longer able to train Mustafa with wielding the staff.

"You're starting to wear me out son," Abdul said to Mustafa. "At this age, staff wielding isn't a good idea."

Weeks later, Abdul broke his hip and was no longer able to train with Mustafa, but instead had a gift for him. "You have done well, my son," Abdul said. "But I can no longer train you the way I was able to before due to my... Injury, but you were very honorable, my son. You deserve this." Abdul was handed his father's prized weapon, The Halberd.

Birth of The Brotherhood

As years past, Mustafa is now 21 years old and fights along with Arkus, Brotherhood in hopes to find the Wielder of Soul Calibur.

Read the rest of the story Here.

Mustafa is wearing black robes similar to his fathers clothing. His upper-body is more revealing than the rest, revealing his chest and bandaged waist. His outfit however, resembles a samurai. Since he is half Sudanese and half Somalian, he appears to have slightly darker skin than his father.

His 2p Costume resembles an African Tribe Warrior, even though he didn't live in Sudan during his childhood due to him moving to Him being a refugee of the Sudanese War, it could possibly be his training clothing.

Mustafa wields a staff and has the advantage of long range attacks. He has a lot of goofy moves and does a lot of powerful strikes usually resulting in breaking the opponents armor. He is a Mid-Tier Character. He shares the same moveset as Xiba

This weapon was used when he lived back in his tribal region, he was a baby at the time but it was brought along with him when they went to America. This was his training weapon.

The Halberd is a rod with an ax at the tip of it,this weapon was passed down to him from his father

Mustafa is a more calm determined fighter. He is also a reliable source of information. He is a Neutral Good Character. 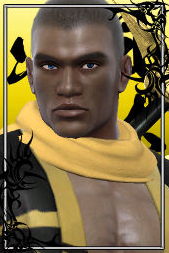 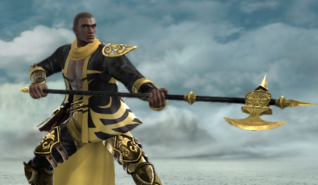 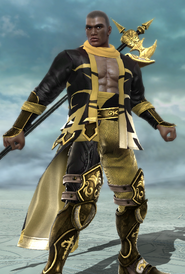 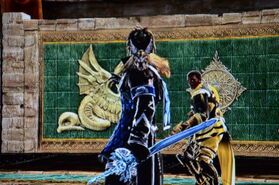 Riley and Mustafa having a friendly duel 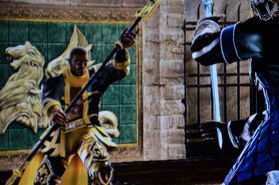 Add a photo to this gallery
Retrieved from "https://soulcalibur.fandom.com/wiki/FanChar:Xlr8rify:Mustafa_Ahmed?oldid=117844"
Community content is available under CC-BY-SA unless otherwise noted.