Parents: Richard and Maria (Both Deceased)

"Tomorrow's victory starts with a heart of steel."
— Nina Lind

Nina Lind(ニーナリンドp, Nīnarindo; Greek: νίνα λίντ, Nina Leeds) is a character in the Soul series. She made her first appearance in Soulcalibur V. She is a character from the not so distant future of the year 2020.

What lies in her Soul is Courage.

Nina grew up on a farm most of her childhood. She was the youngest member of the family. She was the only daughter of the household and had to help out before she could have free time. Riley Lind was The middle child of the family and also Nina's "Best Friend" to her because there were no neighbors around the farm. Riley always taught her something he learned when he was training with his weapon. Henry on the other hand, was very abusive to Nina for some reason. She usually tried to avoid him as much as she could to avoid conflict.

On an early morning, Riley took Nina into the barn where he did his training. He was going to try to teach Nina How how use a weapon. He found a unique blade that would be fit for her. Henry disrupted their session to show off his invention. He was going to "test" out his gun sword. In moments, a militia was sent out to raid the farm. Nina ended up being separated from his brother Riley during their escape and begged Henry for his help. Without hesitation, he shot Nina in order to escape by himself. She was presumed dead and was never found.

"Psst." Nina awoken to feel pain around her waist. She also noticed she is no longer home at the farm, and noticed Riley was no longer there. "Oh boy, you're awake!" A strange girl came out to greet Nina.

"I found you at that burning barn you were at, if it weren't for me, you wouldn't be here," the girl said. The girl had golden hazel eyes, a cat tail and cat ears on her head. "Wha....what are you? Nina asked. The crazy cat girl stopped. "What do you think, just a human like you." Nina found the cat girl a little annoying. "It's...complicated I guess. My family abandoned me a child, I was raised by a cat most of my life and had things we both wanted, freedom. I am a wild and free spirit child and my parents didn't like it, they saw me as...enstranged." The girl shared some things about her. "My name is Katjaa," The girl said.

Nina had a connection with Katjaa as she did save her life. "An older boy took off in a van when you were out." Nina then regained some of her memory. "Why did you shoot me, Henry?" Nina knew that she was betrayed by her own brother. She then decided to seek revenge on him. "He must be stopped," Nina informed Katjaa.

Nina picked up her sword to not forget what Riley has taught her. "I'll do it for you, Riley." She then left for the search of her brother.

Nina's outfit is a short dress that resembles Helen's old costume with some minor changes wearing different arm bands, and different pants. Her outfit is also Light and Dark Magenta.

In her 2p costume, she is wearing more oriental themed clothes

Nina wields a Butterfly Sword. When she was 9 years old, Riley Lind helped her find the right weapon and tried to train her with the weapon that she is familiar with. She usually breaks characters and is good with stabbing and kicking characters. She is slower but a well balanced fighter with both mid range and short range attacks. She is a Mid-Tier Character. She has the same moveset as Leixia does.

Nina is a very caring, and the wisest member in the group. She often has her own words of wisdom during her victory quotes. She is a Lawful Good Character. 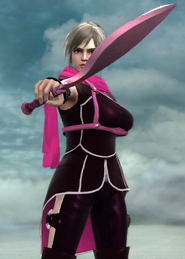 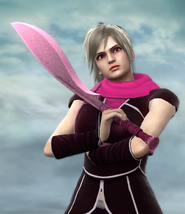 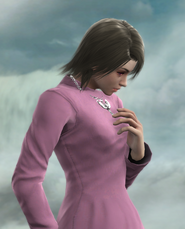 Nina as a kid 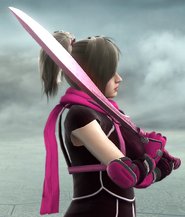 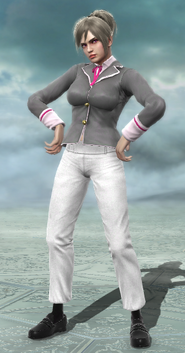 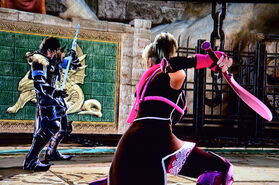 Nina and Riley having a friendly duel 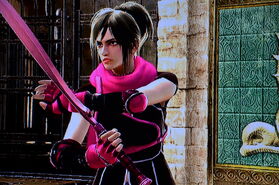 Add a photo to this gallery
Retrieved from "https://soulcalibur.fandom.com/wiki/FanChar:Xlr8rify:Nina_Lind?oldid=118711"
Community content is available under CC-BY-SA unless otherwise noted.