Start a Wiki
watch 02:21
The Loop (Games)
Do you like this video?
Fanon Article Ownership
This Fanon page was created and is owned by SoulGauger (talk), and as such is not part of the Soul series canon.
Unless the edit is constructive and/or minor (such as fixing a template), please do not edit this page unless given permission from the author.

The Soul Calibur Chronicles (ソウルキャリバークロニクル, Sourukyaribā kuronikuru)' is a game in the Soul series and it takes place before and within the events of Soulcalibur IV , Soulcalibur: Rise of Legends and Soulcalibur V

But in between this there are different story's to be told about the many characters in the world of soul calibur and their own destenies and goals and how they are going to forefill them on their own with the help of friends or just fighting alone.

On the many adventures in the three worlds the player will encounter new and older charasters from the previous Soul Calibur games like Taki, Talim, Mitsurugi but also the Legends itself the rivals Siegfried and Nightmare.

As all story's becoming forefilled also The Player will receive experience points to unlock fighting skills and battlegear like new powerfull finishing moves and much stronger clothing along the way, also the player will battle in single and Tag-Team battles with other characters if the time is right to have a double battle.

Each time a battle ends The Player will receive battle points for the skills it used and Experience Points the better the fight was the more points it will receive, at certain points The Player can call the Spirit Orb as an angel named Yuner will appear and use the Powerfull Finishing Move called: Spirits Unite, this move will end the battle in one single hit against the opponent, but when using this move the player will lose points of choice cause the usage of the move requires battle or experience points that the player will have to chose between to pay with.

In the three worlds where the player will travel in is an Open World, in this open world the player can travel to different places that are familiar in other Soulcalibur games, next to the locations that the player must visit to batle there are also side quests around to gain more battle or experience points

Near the end of the third world (Soulcalibur V) the battles are getting more difficult will require more skills and moves then the previous fights also certain Mission Objectives must be aquired to finish the battle, one of these objectives are in a match against Algol the objective is: Score one Ring Out against Algol also more Objectives will be shown and must be done to accomplish the battle.

In the last section of the game the player will travel trough Time Portals as it eachtime will land on a battlefield to fight a strong opponent as the player manages to beat the opponent a new portal will appear as it will head to the next battlefield, at the end The Player must defeat a large horde of clones of past characters which the player already battled in previous fights, if all clones are defeated a new Portal opens to reach the end battles against two powerfull opponents the first battle is against a mimic style opponent afterwards as the last and final battle of the game the player will battle against the last opponent who test out the skills that the player has learned along the way.

Eliana She is the guardian of the Spirit Orb, the player must defeat her to obetain the Orb, She will also appear as a tag battle partner at some battles

Algol The one who uses his whole body as a weapon

Rock You will meet him in the Forrest and fight him

Ivy She awaits you at her home for a duel

Nightmare he will appear sometimes on serval missions, you must defeat him to continue

Shura This swordswoman is the final opponent on the Soulcalibur IV map, she has an all new style with her Twin Katana's and won't be easy to beat, in the Rise of Legends map she will assist the player as its tag partner against Algol

Cervantes He awaits you on his ship

Yoshimitsu This warrior awaits you in front of the hidden Temple

Setsuka She will test you inside the temple or you are worthy enough for a special mission, as the player will also control setsuka in a battle

Xianghua She will take you to her home to refresh yourself

Lizardman This character appears in the vulcanic badlands

Edge Mistress She appears in the last map of the game

Leandra Ω She appears in the last map of the game

Millicent She appears in the last map of the game

Zasalothe She appears in the last map of te game

Alexandra She appears in the last map of the game

Nirvana It appears in the last map of the game

Rima She appears in the last map of the game

Deker She appears in the last map of the game

Draiden He appears on the last map of the game

Robo Knight He appears on the last map of te game

The Guardian Had been created by Spyridon Calibur as a guardian while it was restoring itself, its duty guarding Soul Calibur's Resting Place

Once the player has made his/her character the advenrture starts

On a certain point in the game the player will get the oppertunity to call the Spirit Orb, when this orb appears before the battle the player can choose to use the special move: Spirits Unite if this option is chosen an angel named Yuner will appear to unleash this powerfull move as she will slam the opponent into a Time Warp that it will immediately end the battle after that Yuner will vanish to return later on in the game, besides Yuner there is also another to assist the player this man named:Tsuneharu if Tsuneharu is chosen the player can upgrade his or herself with some powerfull upgrades to use Only in this battle, if the battle is over the power ups that where chosen by the player will vanish,

In the last world Soulcalibur V the opponents who faces the player are also set up with skills these skills can be different eachtime the player faces the opponent, (the battles inside the astral realm may vary from 3 to 5 rounds)

Stage 1 - Characters: Various Enemies (all enemies have the same skills)

Stage 18 - Character: Clone Army (all clones have the same skills) 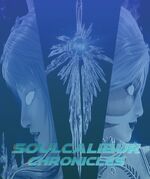 One of the NPC's Ranca

The Player fights against Dark Yuner

Demon Sanya and Lexa will team up against The Player

Zasalothe battles against the (female) player

Galizha attacking The Player
Add a photo to this gallery
Retrieved from "https://soulcalibur.fandom.com/wiki/FanGame:SoulGauger:The_Soul_Calibur_Chronicles?oldid=141156"
Community content is available under CC-BY-SA unless otherwise noted.