Gel-o-Fury (Mōdotakuyō (猛怒託妖, Mōdotakuyō?) in Japanese) is a strong ancient demon once sealed by Taki in the Bamboo Shrine of the Ōmi Province. During the Evil Seed raining, Gel-o-Fury gained enough strength to break free of his imprisonment and, using the water passages that exists under Japan, he reached the Hōkō-ji. Taki followed his trail and sealed him again in the Buddha Shrine.

Gel-o-Fury stayed there until Toki, Taki's master, released and absorbed him. After losing to Taki, Gel-o-Fury left the old man's body and fled to parts unknown. 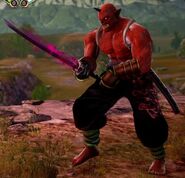 Gel-O-Fury in Create-a-Soul in Soulcalibur VI
Add a photo to this gallery
Retrieved from "https://soulcalibur.fandom.com/wiki/Gel-o-Fury?oldid=172917"
Community content is available under CC-BY-SA unless otherwise noted.