George von Krone was the father of Hilde and was King of Wolfkrone until he lost his sanity to the destructive rains of the Evil Seed, virtually transforming him into an animal.

George was able to overcome religious conflict in his kingdom by establishing new laws and policies which encouraged religious coexistence through diplomacy. He was also able to maintain a strong military presence and was both a gifted warrior and tactician.

After he fell into madness, the king was sentenced to live out the rest of his days in an isolated chamber, located at the very top of the Wolfkrone castle tower. His complete mental shift was so severe that he could not recognize his own daughter. After the events of Soulcalibur IV, he disappeared and has not been seen since.

After Johan Dürer revealed his true intentions and failed to slay Hilde, George arrived on the battle and took Wilhelm's left arm but not before being stabbed with a dagger with a special ointment. Hilde had no other choice but to defeat her father. After being defeated and mortally wounded, George von Krone finally regained his sanity, however, breathing his last breath. Seeing how Hilde could never bear the thought of taking her fathers life, Wilhelm offered to bear that by giving the mortally wound King of Wolfkrone a quick death. 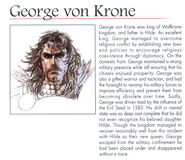 George in Create-a-Soul in Soulcalibur VI
Add a photo to this gallery
Retrieved from "https://soulcalibur.fandom.com/wiki/George_von_Krone?oldid=177297"
Community content is available under CC-BY-SA unless otherwise noted.