Soulcalibur Wiki
Register
Don't have an account?
Sign In
Advertisement
in: Bonus characters, Soulcalibur III characters, Chronicles of the Sword,
and 11 more

"You are strong. One day, you will succeed in life."
— Girardot

Girardot Argezas (ジラルド・アルゼザス, Jirarudo Aruzezasu?) is a fictional character in Namco's Soul series of fighting games. He appears in Soulcalibur III side-quest mode Chronicles of the Sword as the player's mentor and ally at first, then as a rebel enemy. He's also an unlockable Bonus Character in the main game. He represents the "Lance" Create-a-Fighter discipline.

Since Girardot comes from the Chronicles of the Sword mode, his canonicity is disputed.

Girardot was one of the best tacticians and soldiers in the Grandall Empire. He was mostly known for his cold-minded and dirty tactics. To Girardot, victory was the only justice, and he was not hesitant on using low tactics to achieve it. He also thought it honored those fallen in battle.

Even when he was accused of selling his soul, he stood firm with his will strong enough to overcome his fate. But when he became the instructor of the Parousia Academy, self-doubt started to develop in him. One by one his pupils marched to war, and not a single one returned alive. When the young girl he considered a daughter died as well, he recognized the crime he committed.

He instructed them how to die, and he was fostering death. Still, he faced reality and stood firm. He vowed to protect the land and its people with his very soul until the end.

In a short time he joined with two of his former students, Abelia and a young talented cadet, which is the player. He acted as a guide and followed his student's decisions, amazed by his/her personality and actions. At the same time, he entered in various discussions with Emperor Strife due to his strange and almost suicidal orders and his hesitance to send back-up units.

A year after Dalkia's fall, Girardot recognized the emperor's dictatorship and the oppression of the empire, and rebelled against him and founded a rebel army of rebelled knights and peasants. But Strife sent his own student against him.

After two victories, the Cadet faces Girardot in Chronicle 15 in his stronghold, and after his defeat, Girardot tries to make the player understand what he's/she's falsely fighting for, and what he/she should truly fight for: the people. But before he can end his speech, Strife suddenly appears and stabs him with Soul Edge, killing him instantly.

Girardot's icon from the character selection screen in Soulcalibur III

The flag of the Rebels 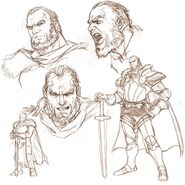 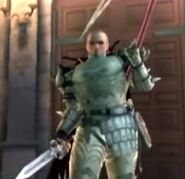 Girardot, as he appears in Soulcalibur: Broken Destiny
Community content is available under CC-BY-SA unless otherwise noted.