Gisele is a character in the Soulcalibur series of games. She is a young, green haired woman holding a small crossbow and a few cards. She wears an eyepatch, though it appears she isn't missing her eye. She is one of Dampierre's henchmen. In Dampierre's profile, she is referenced as The Lady Bandit Gisele.

Before she joined Dampierre, she was the Italian niece of a noble that encountered Dampierre's crew (which consisted of Alphard and Ludovigo) at a salon in Toledo. Ludovigo had offered them a forged art piece, and Dampierre stepped in to conclude negotiations. She met with Dampierre and offered a rather large sum (described in Dampierre's Journal to be "a glittering mountain of money") for the artwork, and he gave her a rose to mask his deception.

Later, as Dampierre and his subordinates were about to head to Wolfkrone, they were hired to kidnap Gisele (though they were oblivious to her identity at the time) but realized who it was as they attacked the carriage. Dampierre managed to convince Gisele that they were here to prevent her from being "kidnapped" by soldiers coming in actuality to halt the abduction (hinted to have been sent by the man who hired them.) He then managed to convince her uncle through a letter to grant him and his crew passage into Wolfkrone, and convinced Gisele to join him and write a letter to her uncle saying that she was safe with him, while he also considered the possibility of extorting ransom money from him.

Dampierre with his henchmen. Gisele can be seen on the right.

Sketch of Dampierre with his henchmen 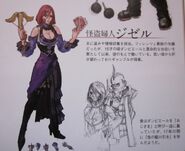 Add a photo to this gallery
Retrieved from "https://soulcalibur.fandom.com/wiki/Gisele?oldid=177134"
Community content is available under CC-BY-SA unless otherwise noted.