Start a Wiki
watch 02:21
The Loop (Games)
Do you like this video?
Jacker was Kyam's close friend in their freelance pirate crew. Jacker usually hangs around with his partner, Dosh to enter the bar near to the town when they've finished their work. While Jacker is conversing with Dosh, Kilik suddenly appears in front of him. Kilik tells Jacker that he would like to travel alongside them and so Jacker tells Kyam about Kilik's request. Kyam sympathizes with Kilik and allows him to stay until Maxi, the captain, returns.

During Kilik's stay, the ship is ambushed by Astaroth and hordes of Lizardmen. Jacker fights a group of Lizardmen alongside with Kyam. Shortly after Kyam is held as hostage, Jacker doesn't survive when Maxi returns to the ship.

Chin:Scar(3,7) {Scar is actually on the opposite side}

Information in create a soul formula section was contributed by Ericard[1].

This is a dialogue from the manga during the ambush by Astaroth:

Jacker: Damn they are too strong! We must regroup until our Captain returns!!

Kyam: Just stand together and kill those creatures to show them no mercy! 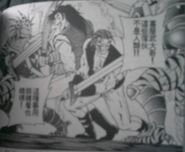 Jacker(Right) battle alongside with Kyam(Left) in Soulcalibur Manga Comic
Add a photo to this gallery
Retrieved from "https://soulcalibur.fandom.com/wiki/Jacker?oldid=96298"
Community content is available under CC-BY-SA unless otherwise noted.