Anything (depending on the player's choice)

Anything (depending on the player's choice)

KOS-MOS is an android from the Xenosaga series. In Soulcalibur III, her appearance can be unlocked as the Type X Character Creation parts, making her a "pseudo-guest" character of sorts.

As she is an android, a logical explanation for this would be that, due to her malleable abilities in her original series, she was included to highlight the new Character Creation system in Soulcalibur III.

KOS-MOS has significant powers believed to be superior to all other party members. In addition to superhuman strength and speed, her body is formed from some sort of highly advanced nanomachines that allows her to morph parts of her body (specifically her arms) into various energy projectile and melee weapons. This body is also able to self-repair and is very durable though not indestructible, and she is also protected by a force-shield. She also possesses the ability to summon weapons such as the F-GSHOT chainguns and her famous F-SCYTHE and equipment either from some internal chamber that compresses space or from another location via teleportation. She also has a long-range sensory array, the D.S.S.S. system and CPU that either rivals or exceeds even those possessed by Observational Realians.

KOS-MOS possesses several black box components left behind by Kevin Winnicot since the current KOS-MOS is essentially the archetype resurrected. There are still many 'black boxes" to be revealed but two include her potent "X-buster" a weapon that fires powerful energy beams from her abdomen as well as absorb Gnosis, and components that her give her some kind of self-awareness. KOS-MOS also has some form of energy manipulation tied to the Zohar.

KOS-MOS has one last weapon system called the Tertiary Weapon System, which is seen periodically throughout the series. They consist of a set of energy wings, a pair of energy cannons and other attachments meant to be fitted onto her. The wings and cannons are part of a Phase Transfer Cannon. While wearing this gear she is shown in a premonition flying through space at sub-light speed and then confronting U-DO above an unknown planet. The exchange that follows destroys several galaxies. The "Third Armament" as its also known makes a real-time appearance in Episode II on the Omega System. KOS-MOS uses this equipment to protect Shion and the party from a Phase Transfer blast by Proto Omega.

the "Recipe" to create KOS-MOS 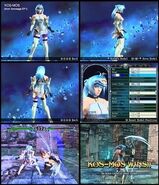