In this Chinese name, the family name is Kong (孔).

Kong Xiuqiang (クン・シュウチャン, Kun Shūchan; Chinese: 孔秀強, Pinyin: Kǒng Xiùqiáng) is the estranged father of Xianglian and Chai Xianghua and former resident of the Ling-Sheng Su temple. During his days as a monk (when he was aged 20), he fell in love with a woman named Xiangfei and fathered two daughters with her. When their relationship was discovered, the monks took Xiangfei's daughter and she was forced to leave the temple.

Kong would later steal the Krita-Yuga to give to her as a promise that they would meet again. Xiuqiang was intended to be the successor of the Kali-Yuga, but was banished from the temple when it was discovered that he had stolen the Krita-Yuga. Since leaving the temple, Xiuqiang has joined the Korean coastal defense force with Hwang Seong-gyeong and trained Seong Mi-na as well as Xiba in the Ling-Sheng Su martial arts.

A local drunk beggar with the name of Kong Xiuqiang was Chai Xiangfei's protector (Who is also known as Golden Swallow). He was secretly helping her avoid being ambushed at night. One morning, Xiuqiang, who is referred to as "Drunken Cat" tips off Golden Swallow to the bandits whereabouts. It is revealed that they've taken siege of a Buddhist temple. Under the guise of an acolyte, Golden Swallow penetrates the temple and confronts the man who's taken her brother hostage. During the brawl she is injured by a deadly poisoned dart. She manages to escape and is rescued in the woods by Xiuqiang who nurses her back to health. While she's convalescing, Golden Swallow learns that Xiuqiang is a martial arts master and a leader of a Kung Fu society. Unfortunately, the bandits have allied with an evil abbot, who is a rival for the leadership of Xiuqiang's sect. The evil abbot is actually revealed to be Xiuqiang's brother who had inducted him into the Ling-Sheng Su temple. For both reasons, Xiuqiang is reluctant to fight against him even though Xiuqiang knows about the abbot's criminal deeds.

In order to release the General's son, Xiuqiang stages a prisoner exchange. During the exchange, the government soldiers receive the General's son, but Xiuqiang prevents the bandits from releasing their leader. As the government soldiers march the bandit leader back to prison, the bandits then attack the procession. Golden Swallow, leading her group of female warriors, eventually fight off the bandits. Xiuqiang's brother then forces a showdown with Kong Xiuqiang.

Xianghua's ancestors, the Chai family, have groomed men and women alike into seasoned warriors of China for many generations. The Chai family was born in the heritage of General Ming. The woman who would become Xianghua's mother, Xiangfei, was sent to the prestigious Ling-Sheng Su Temple to learn the art of swordplay. She diligently trained and became supremely skilled with the jian, surpassing many of the monks at the temple.

Following her father's passing, Xiangfei forged a forbidden romance with a monk at the temple,[Kong Xiuqiang, thought to be the most prominent candidate for inheritor of the holy bo staff, Kali-Yuga. Not until the illegitimate birth of their first daughter, Xianglian, was their love made known to the other monks. The monks remained very strict regarding the temple's edicts and Xianglian was taken from her parents on her second birthday.

Xiangfei became too wrought with grief to remain at the temple. Han Dongxiu, a sworn brother of both Xiuqiang and Xiangfei, urged Xiuqiang to leave with her and start a family with his lover, but Xiuqiang refused, and Xiangfei agreed that it was for the best. But as a final goodbye, Dongxiu helped Xiuqiang sneak the Krita-Yuga to his lover, to serve as a promise the two would one day meet again.

Unknown to Xiuqiang, however, was that when Xiangfei had left the temple, she was pregnant with a second child. She secretly returned to her homeland, was taken in by the Chai home there, and became a soldier in the Ming Dynasty Imperial Guard. Months later, she gave birth to her second daughter, Xianghua, but never revealed anything about the girl's father or his lineage to her.

By this time, the temple had realized that the Krita-Yuga was missing, and found that Xiuqiang had stolen it. He was exiled from the temple, but Xianglian was to remain there to be trained as an orphan. Xiuqiang eventually discovered Xiangfei's whereabouts, but the Chai family asked him to leave her alone, as she believed that he was training and she would be happier in her ignorance. Meanwhile, when monks from the Temple came to Xiangfei, searching for the missing sword, all they found was young Xianghua playing with a battered jian, and they gave up the search years later. Only Xiuqiang had known that the jian Xianghua had been holding was actually the Krita-Yuga in disguise.

Questioning her own strength, Seong Mi-na met a middle-aged, alcoholic man with a beaten bo staff who jeered her and told her not to challenge people so hastily. But true to form, she attacked him and never landed a single hit, as he caught her guan dao with his bare hands. She asked if she could train under him, and he reluctantly agreed; despite his chronic alcoholism, his ability with the bo staff taught her much during her training. After a year of training, he mysteriously disappeared while out to buy more alcohol, and her only trace of him was a goodbye note telling her there was nothing more he could teach her, signed by a one 'Kong Xiuqiang', who was, in reality, Chai Xianghua's long-lost father and an exiled student of the Ling Sheng-Su Temple Ruin. From this experience, Mi-na learned to never underestimate the strength of an opponent, and she continued training for two years until she was ready to resume her quest for the Soul Edge.

His name consists of the family name, Kong (孔) and the characters for "handsome, elegant" (秀) and "strength" (強). 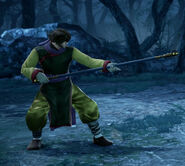 Add a photo to this gallery
Retrieved from "https://soulcalibur.fandom.com/wiki/Kong_Xiuqiang?oldid=177306"
Community content is available under CC-BY-SA unless otherwise noted.