"The flames of war burn the wills of warriors."
— Narrator

Last Rites on the Battlefield is a stage in Soulcalibur V. It is similar to Tranquil Wasteland in that it expands and has no obstacles. However, the background of the stage is littered by dark, thick smoke from the flames of an ongoing war. Located on the plains of Hungary, a battle wages between the mercenaries of Schwarzwind and the malfested forces of Nightmare. 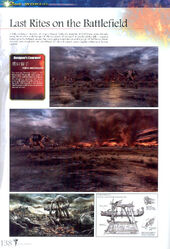 Add a photo to this gallery
Retrieved from "https://soulcalibur.fandom.com/wiki/Last_Rites_on_the_Battlefield?oldid=173331"
Community content is available under CC-BY-SA unless otherwise noted.