watch 01:23
'SOULCALIBUR VI' - Mitsurugi Showcase
Do you like this video?
Play Sound

Heishiro Mitsurugi (御剣 平四郎, Mitsurugi Heishirō) is a character in the Soul series of fighting games. He is a mainstay of the Soulcalibur series and one of most iconic characters in the franchise.

Mitsurugi has only one goal in mind: To seek out the strongest warrior and challenge them to a duel then become the strongest warrior in history. He is never satisfied at the opponents he defeated in battle. Aside from being annoying and to good, Mitsurugi is the kind of a person who sticks to his words; he's not all show. Being a ronin, he fights with honour and kills his opponents in an honourable fashion, and several of his endings reveal that he has a moral side. As shown in one such ending, he is shown to believe that true strength lies within a person and not from the weapon. He is considered a neutral character.

The castle owned by Noto Murakami and the Settouchi Pirates (also called the Mori Sea Force). This castle is built on the whole island, and act as a port and a barrier in the seas. It also supplies pirate ships between raids. Mitsurugi comes here seeking a boat to the mainland.

Mitsurugi's stage in Soulcalibur, and based on the real-life Siege of Takamatsu, orchestrated by Toyotomi Hideyoshi after he constructed a 3-kilometer bank around it in order to stop the flow of water and produce a flooding. Mitsurugi, as a trusted mercenary on the base of Mori's Murakami Navy, was assigned the defense of the castle during the conflict. The stage consists on a wooden raft amidst battle, with the castle as background and flaming arrows constantly flying around.

Mitsurugi's stage in Soulcalibur II, situated in Xiwei at the west border of the Ming Empire. It is said to be a vital stronghold for the Empire's keep of the western territories. As explained in Xianghua's profile, the castle was attacked when the Emperor believed the castle was hiding Soul Edge. The stage is shared with Xianghua for the same reason.

Battle in the Strait (SC3)

Mitsurugi's stage in Soulcalibur III. The stage resembles slightly his Soulcalibur stage, albeit this one is set atop a half-sunken battleship amidst a naval battle. As said in his game profile, the stage shows one of many sea battles held between the Murakami Navy and Hideyoshi's Kuki forces. It is said that the Murakami started with the advantage, but were eventually pressed back and defeated.

The same as Virgin Snow, though instead is set in Autumn.

Misturugi appears as a card in Outcast Odyssey. He appears roughly the same as he does in Soulcalibur IV, he also has a brand new topless costume. He is a Limited time card, available until 7 September, 2015. 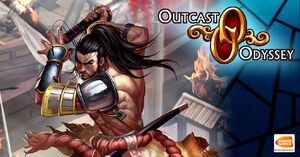 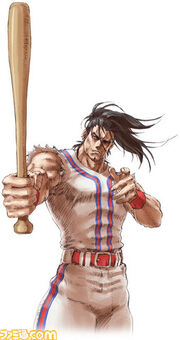 Mitsurugi is a playable unit in Namco x Capcom along with Taki, while Charade appears as an enemy unit. 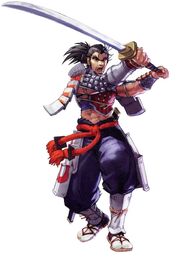 The poster car the MITSURUGI Meltfire is based on Mitsurugi and features decals referencing other Soulcalibur characters such as Astaroth.

Retrieved from "https://soulcalibur.fandom.com/wiki/Mitsurugi?oldid=184248"
Community content is available under CC-BY-SA unless otherwise noted.