Natsu (凪津 or ナツ) is a character in the Soul series of fighting games. Her first appearance was in the series' sixth installment, Soulcalibur V. She appears as a playable unit in Project X Zone 2 as the sole representative of the Soulcalibur franchise.

What lies in her soul is Confidence. In Soulcalibur V's promotional material, she is referred to as a Worthy Successor.

Despite her Japanese name and origin, Natsu has golden blonde hair (this is explained in New Legends of Project Soul as being because of Arahabaki). She has a curious hairstyle consisting of multiple ponytails on the back of her head and she wears a shiny pink hair-clip decorated with feathers. Natsu wears a scarlet bodysuit with long sleeves and is protected by partial armor on her arms and hips. She has a liking to glittery pink items, as even her swords' handles are pink and their scabbards are decorated with pink stones. There is a red bandage tied around her right thigh and the feather motif is repeated on the back of her greaves. She has strings of shiny pink beads attached to her waist. Natsu's outfit is bird themed, possibly falcon, which is visible in the recurring feather ornaments and the decoration of her vambraces.

Due to Natsu only making a very brief appearance in the story of Soulcalibur V, there isn't much known about her, other than that she seems to be a spirited young girl.

Judging by her pre-battle and victory quotes Natsu is lazy and rather cocky. When looking at her face Natsu is shown smiling most of the time and she playfully laughs and chuckles when attacking, showing her playful and rambunctious side while also maintaining a serious fighting spirit.

Natsu is also rather stubborn and disobedient, as she would sometimes disregard and ignore the Fu-Ma clan's rules. However, she seems to listen to those whom she respects or cares for, like her master Taki. It is possible that her personality is affected by the spirit of Arahabaki.

Since Taki had often left the village to carry out missions, Natsu was raised as the adopted child of Chie. The gentle Chie was always there to heal Natsu's heart, injured by discrimination. Growing up with the stigma of being "possessed by an evil spirit." But she is gentle and a very kind person.

As a child Natsu was particularly shy, but she gradually grew up into a cheerful and lively girl after receiving Taki's teachings.

Natsu appears to pay attention to her appearance, a characteristic common for a girl of her age. Although she may be accustomed to the prejudice around her, she still seems to suffer from handling her unruly hair every morning.

Natsu was a member of the demon-fighting Fu-Ma clan. She grew up under the harsh glares of her fellow ninja, who feared the great demon Arahabaki that was sealed within her. Some even made attempts on her life.

Thankfully, Natsu's master, Taki, protected and supported her. The young ninja came to love and respect her mentor; though she often disregarded the clan's rules, Natsu always obeyed Taki.

But now it had been several months since Taki left on a mission to the western continent, and Natsu was growing uneasy.

"Master said her journey would last no longer than two weeks..."

It was then that a girl named Leixia appeared at the gates of the Fu-Ma village. She explained she was on an "adventure" to uncover the secrets of a mysterious pendant. When Leixia learned of the demon dwelling within Natsu, not only did she show no fear, but she was actually envious of Natsu. Drawn to the girl's cheerful innocence, Natsu offered to serve as her bodyguard. After all, the trip might provide an opportunity to find her missing master as well...

And so it was the two girls began their long journey west...

Natsu uses an improvised version of Taki's moveset, focusing on close to mid-range. Natsu retains Taki's Possession stance in Soulcalibur IV. Compared to Taki, Natsu has higher damage output, but has fewer mix-ups with certain attack strings. To compensate, she has a few delayed input attacks to catch the opponent off-guard and deceptive options in Possession stance, such as using a bomb, quickly changing to a horizontal attack, or even teleporting behind the opponent. Like her master, Natsu has some of the fastest attacks in the game (i.e. A:6) and effective punishers. She also has some of the best okizeme in the game, mainly by the fact she can pressure her opponent with bombs (especially the unblockable version) or low attacks after knocking them down at the end of a combo.

With her wide array of useful tools, speed and damage, Natsu is considered by the SoulCalibur community as a top-tier character.

Great Curse of Arahabaki: Natsu will hold her kodachi in the air and exclaim, "Let's get serious...Arahabaki!" She will then stick her kodachi into the ground as she summons the Great Demon, sending six wild blasts through the stage and her opponent high into the air. This Critical Edge is very effective as it leaves the enemy vulnerable to numerous air combos and can be used to finish or extend a combo. Additionally, Natsu can quickly shift into her "Possession" stance during this attack, which can cause danger to the opponent even if it is blocked. The downside to this Critical Edge, however, is that it can be easily evaded by the "Quick Step" tactic if the enemy is prepared, leaving Natsu open for attack.

Natsu appears in the crossover RPG, Project X Zone 2. She is a solo unit and is the first character from the Soul series to appear in the Project X Zone franchise with Mitsurugi, Taki, and Charade appearing in the previous game Namco x Capcom. 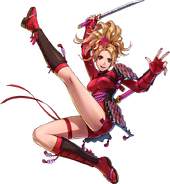 A sketch from the Japanese site.