Night Terror (ナイトテラー Naito Terā) is the secret final boss in Soulcalibur III, portrayed as the ultimate form of Nightmare, and can only be accessed by following a certain path in the story mode Tales of Souls while fulfilling certain requirements, such as not losing a single match. Night Terror is not an unlockable character, though he is playable through certain cheat devices. Defeating it unlocks its profile and concept art. It also has its own mission in the Missions mode, known as "Final Battle", where the player can confront it without having to go through Tales of Souls. New Legends of Project Soul reveals it exists as the completed Soul Edge in Astral Chaos (with Nightmare as its counterpart in the living world) and implies it to be the personification of the Astral Chaos itself.

It is the personification of Catastrophe.

Night Terror appears as a hulking armored beast vaguely resembling Nightmare. What was once azure armor and flesh has become a combination of armor and bone with an orange/red sheen. The helmet area has grown and developed a large crest-like shape and the muzzle-covering area has been removed to reveal a lipless mouth with long teeth shown and its eyes are a beady yellow. At the center of its chest is a glowing core of energy which spreads throughout its upper body. In place of hands are a pair of giant claws and in the "palms" are fully functional mandibles, although this does not appear to hamper its ability to wield a sword in the least. Lastly, a slightly long tail has sprouted from the base of the spine area. Flowing from its back are a pair of large, fiery wings.

Wielding the might of the fully completed Soul Edge, Night Terror is the most powerful character in the Soul series, it possesses all the abilities of Nightmare but amplified many times over. Night Terror also possesses the ability to fire high powered energy lasers from his head and can fly using its fiery wings. It was able to obliterate Zasalamel completely with a single attack, and despite the fact that it is thought impossible to truly kill Zasalamel, he was fully destroyed by Night Terror and unable to return, due to Night Terror's ability to utterly destroy a soul. Night Terror can also move so fast that upon its appearance it got behind Zasalamel and killed him without Zasalamel and Siegfried even being able to see it. Dwelling within Astral Chaos, it is an incarnation of pure destructive will, and the personification of Catastrophe, with its immeasurable power, not even the mighty Algol (who is capable of warping reality within Astral Chaos) dares to stand against it. Its incredible power also makes his height and weight impossible to determine. Its possible that Night Terror's sheer destructive force could destroy the universe or beyond if it weren't confined to the Astral Chaos.

Night Terror is special in which all attempts to "ring out" its character is superfluous; doing so would trigger a scene in which Night Terror uses its wings to fly back to the arena. It possess beefed-up moves taken from both Nightmare and Siegfried, as well as a few unique ones; like a flying stance that automatically Repels attacks while in the process of moving into said stance, an unblockable eye-beam projectile, and a diving attack done from the flying stance. It is, by far, the most powerful character that appears in Soulcalibur III, possessing the greatest reach, speed, and power. Some of its moves can take off nearly half of a full life bar; its eye beam has the potential to take off more than half. It also possesses a variant of Nightmare's A+B attack. While it has more frames, making it a bit slower, it also cannot be interrupted as it Repels any attack thrown at Night Terror and has a very huge hitbox, allowing Night Terror to punish opponents with ease. It also has access to an alternate Soul Smasher-like attack that generates a werful fission that stuns the opponent from anywhere so long as they're on the ground and its Rook Splitter and Right Slasher generates energy shockwaves to attack opponents from a distances.Furthermore, Night Terror's normal Guard Impact is a Just Impact, regardless of timing, giving it a far more significant advantage in defensecthan any other character in the game. Night Terror is still an AI character however, nd is vulnerable to Anti-AI Moves.

In Soulcalibur III: Arcade Edition, Night Terror remains an unplayable boss character, though this time he appears at random in the arcade's end match, alongside Abyss.

In the PlayStation 2 version of Soulcalibur III, Night Terror is seen when the correct trigger command is done in Nightmare's ending. Rapidly tapping the button indicated turns Nightmare into Night Terror. He slams down amidst several guards and flings them aside, then flies off the scene.

Night Terror has a short entry in New Legends of Project Soul, which portrays it as a seperate entity from Inferno that roams Astral Chaos, utterly destroying anything it encounters. Its power is immeasurable, making even Algol afraid to confront it.

*Night Terror appears in an alternate ending scenario where Zasamel accidentally gives the power of Soul Edge and Soul Calibur to Nightmare, when he used his arts and tried to take Soul Edge's power for himself, instead of taking both swords at the same time.*

When an action is so reckless that it will bring about one's own destruction, it is often too late by the time one realises it. For Zasamel, the appearance of Night Terror was a perfect example of this.

Even Zasamel had underestimated the power of the cursed sword. It far surpassed that of his secret arts. During the ritual when Zasamel attempted to take the power of Soul Edge for himself, it fused with not only the summoned Nightmare, but with even the power of Soul Calibur, becoming a terrible incarnation of pure destructive will. It is likely that Zasamel never even saw it's form--Night Terror. Perhaps it had retraced the memories of it's blue armor, or perhaps it had a remnant of the self-will that formed while it used Siegfried as a host. Whatever the case, this entity bore an unmistakable resemblance to Nightmare. It easily escaped Zasamel's control and appeared behind him, wielding it's power like a raging current, and obliterated him.

The man who had craved death met his end--though not in the way he had intended. In his place, an unprecedented catastrophe gained wing and claw and was released upon the world.

The embodiment of calamity that resides in Astral Chaos. Night Terror does not show any signs of intelligence, but simply flies around Astral Chaos utterly destroying any souls it comes across. With seemingly immeasurable power, even the Hero King Algol has thus far avoided interacting with Night Terror.

Nightmare's second costume for Soulcalibur IV strongly resembles Night Terror, and the weapons they wield are exactly the same. 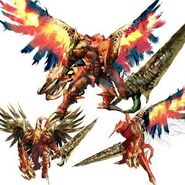 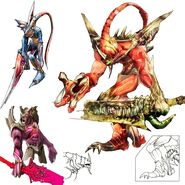 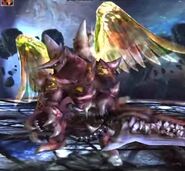 Night Terror in Soulcalibur III
Add a photo to this gallery

Night Terror fighting against Inferno in Soulcalibur III: Arcade Edition
Add a photo to this gallery 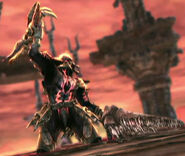 Nightmare's Player 2 costume
Add a photo to this gallery

Add a photo to this gallery
Retrieved from "https://soulcalibur.fandom.com/wiki/Night_Terror?oldid=176659"
Community content is available under CC-BY-SA unless otherwise noted.