A zweihander once wielded by Siegfried when he temporarily escaped the curse of Soul Edge and tried to make amends. Its thick blade is very sturdy, but it is heavy and not suited for clashing directly against other weapons.

This sword has two principal appearances. The first is a straight wide sword with an accentuated broad edge at the end and a ring on the crossguard. The second has more of a gothic style with intricate designs all over the blade that lacks a crossguard yet has a spiked flamberge design along its lower length.

This second is the main weapon of Siegfried in Soulcalibur Legends. Though the game is non canon, he discovered that the forger who forge this weapon gave his own life to finish the weapon. Lloyd states that in his world, he chases weapons like Requiem and Soul Edge, because they are somewhat "magical". It is also stated that it was originally known as 'Gram'. Whether or not this makes it related to Gram that Siegfried has as an extra weapon in several other games is unclear. Strangely, the weapon appears in its typical 2p design in this game.

It should be noted that 'Requiem' is also the name for an identical sword to the 'gothic' 2P Design which appears in 'Tales Of Graces', another Namco-Bandai game, which is obtained during a sidequest. It is an item which is to be delivered to the champion of Riot's Peak (Tales of Grace's Battle Tower), who bears ice skills, not unlike those of Siegfried's skills with Soul Calibur.

The Requiem in Soulcalibur II 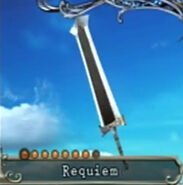 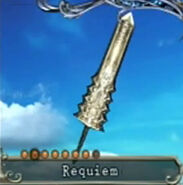 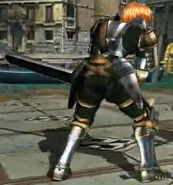 Siegfried wielding the Requiem in Soulcalibur 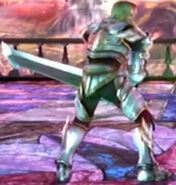 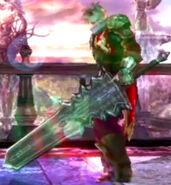 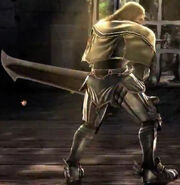 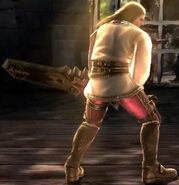 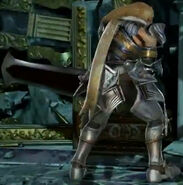 Player 2 Variant (Soulcalibur V)
Add a photo to this gallery
Retrieved from "https://soulcalibur.fandom.com/wiki/Requiem?oldid=177273"
Community content is available under CC-BY-SA unless otherwise noted.