View source
watch 02:19
Wiki Targeted (Games)
Do you like this video?
Play Sound

12th day under the Chanting Moon

Unknown, she is old for a human but young among her people

The stubborn elders in the woods

"I'll show you what true shame is!"
— Scheherazade

Her weapon, named Alf Layla Wa Layla, is a rapier. The weapon's name comes from the Arabic name of One Thousand and One Nights, a collection of stories told by the original Scheherazade, a legendary Persian queen. Like all of the bonus characters, Scheherazade's moveset is recycled from one of the main character's; she uses the same moveset as Amy.

What lies in her soul is Fervor.

There was once a war between Soul Edge and Soul Calibur that shook the world. This tale was of great interest to Scheherazade, the storyteller of her people. She manages to avoid the elders who had concealed themselves long ago in the deepest parts of the woods. She found herself tangled in many troubles, though she still managed to satisfy her curiosity; only to be taken back to the woods again in the end.

Normally, the ones who leave the village are put to death, but Scheherazade instead was locked away in an arboreal prison. There she spent many years thinking about the man she loved, a young warrior who would become the founding father of Wolfkrone. Eventually, her time was served and she was released. However, Scheherazade showed no signs of remorse. Instead, she fled the village once again.

Scheherazade's people lived many, many years longer than humans. The successions of the outside world were very swift to her. She was certain her beloved had died long ago, though she thought he must have left some legacy and was determined to find out what it was for herself.

Thousand Roses: Her critical finish is exactly the same as Amy; she stabs her opponent several times and does a slow motion attack as a final blow, the only difference being that a feather will come out instead of a rose petal.

Sheherazade meets Algol. She remembers her beloved from long ago and how his story ended. She decides to end the story of the man resurrected by Soul Edge then and there, though should the story really end there? 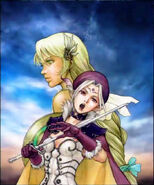 Scheherazade and Sophitia
Community content is available under CC-BY-SA unless otherwise noted.
Advertisement