The Shrine on Ōmi Isle is surrounded by bamboo. It was built for the purpose of containing horrible Fury-demons.

It is said that in the shrine rests a weapon capable of manipulating the human spirit.

Taki's stage in Soul Edge. The stage consists of an arena found inside a vast bamboo forest, with a shrine on one of its corners, which according to the story is where Taki sealed dangerous spirits and demons. Even though it has never returned as a stage, it is mentioned in Taki's Soulcalibur profile, as the place where she was trapped by Geki, Toki's right-hand man.

The Shrine of Confined Demons 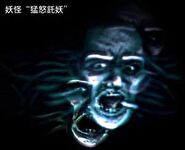 The demon haunting the Shrine of Confined Demons
Add a photo to this gallery
Retrieved from "https://soulcalibur.fandom.com/wiki/Shrine_of_Confined_Demons?oldid=148588"
Community content is available under CC-BY-SA unless otherwise noted.