Shugen Kokonoe is a fictional character in the Soul series of games. He is the former master and caretaker of Setsuka.

Without a family to turn to and exposed to hate and violence, Setsuka ran away from her home. Young and alone, she wandered to a city where a man took her in, and named her Setsuka (Snow Flower).

Her caretaker worked as a bodyguard in the region. He taught Setsuka the technique he used to protect his patrons, and it would eventually become the way she protected herself, but it was the joy she felt when he praised her that made her devote to the training. Time passed, and Setsuka grew into a beautiful woman. She learned to ignore those who still looked her with disdain, letting nothing trouble her.

One day, her master entrusted her with a note, whose destination was far away. It would take her many months to travel there and back. Her master saw her uneasy look, and reassured her that her home will be always there for her. Setsuka left and, after a long journey, found the man to whom the letter was addressed. The old martial artist ran a dojo in a small village, and asked Setsuka many times to stay and train there, but she refused his invitation and started her long way home.

Upon her return, she found him lying on the floor injured. Although he would not reveal how he received the wounds, she was certain that he lost a duel. The injuries he received would prevent him from wielding a sword ever again. But still, the man tried to behave as always, even if Setsuka couldn't hide her concern. His lessons become more strict and demanding, but he also showered her with overwhelming love, something new to her. Even if their modest lifestyle couldn't afford luxuries, he bought her an elegant long-sleeved kimono. As she blushed under the man's smile, her feelings for him grow stronger than ever.

It was not fondness as a father nor reverence as her master. It would not be until after his death that she would come to recognize those feelings as love. Visiting his grave, she recalled the words he had spoken on his deathbed. .."I did not teach you this art for the purpose of revenge. ..One who lives by the sword harbors no regret." That fateful fight had been the most exciting moment of his life. He taught her his fighting style so she can carry on the art, as he wanted her to live freely, unbound of hate or fear. Before dying, he told her his enemy's name: Heishiro Mitsurugi.

She shed no tears when her master died. Only later she realized her feelings and finally understand what it meant to fall in love. Her master didn't want her to live bound to feelings of revenge, but she was decided. With undying love in her heart, she went on a lone journey with a target in mind: a wandering swordsman who challenged swordsmen throughout the land, which no one saw him after he crossed the sea several years later in search of a swordsman named Nightmare. With few clues, she decided to track down Nightmare, believing it would lead her to Mitsurugi. 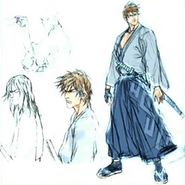 Add a photo to this gallery
Retrieved from "https://soulcalibur.fandom.com/wiki/Shugen_Kokonoe?oldid=175001"
Community content is available under CC-BY-SA unless otherwise noted.